Consider This: Charlotte Mason and the Classical Tradition 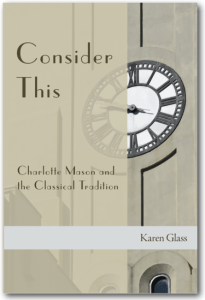 I’ve spoken at homeschool conferences about the confusion of educational methods that all claim to be forms of classical education. Some homeschoolers believe that following the trivium as stages of learning is a critical element while others do not. Some claim that it can’t be classical if you are not teaching Latin with a goal of having students read ancient classics in their original language. At the same time, Charlotte Mason aficionados often consider themselves part of the classical camp. Are they wrong in doing so?

Charlotte Mason, too, was dissatisfied by the general trends of education in her time. Progressive practices had made education utilitarian and mechanical, while the distortion of classical education as it was widely practiced was inadequate to meet the needs that she saw in the children she taught (p.8).

Mason investigated the philosophical roots and critical elements of classical education. “She paid attention to those things they valued most highly and developed a fresh presentation for some very old ideas“ (pp. 8-9).

Mason researched fundamental questions that underlie educational endeavors such as, What is the nature of man?, What is the purpose of education?, and What role do virtues play in education? For Charlotte Mason, answers to these questions had a great deal to do with both the content and delivery methods of education.

Mason stressed the importance of beginning with synthetic learning rather than analytical learning. That means starting with stories and connections between things rather than with the isolated facts and skills that will later be combined into coherent knowledge. Glass claims that Mason’s stress on the importance of synthetic learning in the early years is one of the strongest links to true classical education. This important concept seems to be one that divides folks in the classical education realm—with some advocating synthetic learning in the early years and others advocating memorization of facts. Much of this divide arises from Dorothy Sayer’s interpretation of the trivium as stages of learning that supposedly parallel developmental stages, an interesting topic that Glass explores at length.

In Consider This, Glass shows how Mason drew upon the essentials of classical education while making it practical for a wide range of students as well as teachers. While some see classical education and Charlotte Mason’s approach as in conflict with one another, Glass reveals the essential unity between them. Glass’s explanation indirectly serves as a terrific primer for modern day educators who want to implement either classical or Charlotte Mason approaches to education, desiring that her readers understand that choosing the Charlotte Mason approach means that you are doing both.

One element that both classical and Charlotte Mason education obviously share is the use of living books, although you are likely to find differences in how those books might be used. Education in the natural world—getting outdoors to explore, experience, and observe—is more clearly identified with Charlotte Mason’s approach but isn’t exclusive to it. As Glass says,

In laying a wide and varied feast of knowledge before her pupils, Charlotte Mason was encouraging them to form relationships for themselves with their fellow man through literature and history, and with the natural world around them. In spite of the variety of books that appeared on her programs, she never lost sight of the synthetic understanding that all knowledge is connected, and she desired that the children should grow to understand that for themselves (p. 102).

Christian presuppositions inform Charlotte Mason’s approach, and these are mentioned from time to time. Glass is aware of the concern that many home educators have regarding the compatibility of classical education with a biblical worldview, and some might have concerns about Mason’s approach as well. In an “Afterword, ”Glass addresses this question, not to defend the compatibility of all classical education, but to defend Charlotte Mason’ s implementation of it. Personally, I think that this is one area, where Mason clearly makes it much easier for Christian educators. As you read Mason’s works, it is obvious that her conception of the nature of the person is entirely biblical as, for example, her methods recognize the importance of building character and virtue as foundational building blocks. Even so, non-Christians find Charlotte Mason’s methods workable as long as they value the importance of teaching character and virtue.

I have barely touched on the myriad of vital questions that Glass addresses in Consider This. I highly recommend this book to all those interested in the philosophy of education as well as to those just trying to sort out whether or not they want to use a classical or Charlotte Mason approach. I appreciate the way that Glass so eloquently addresses the big questions clearly and understandably then shifts gradually toward the details about how we, too, can follow in Mason’s footsteps.

Consider This: Charlotte Mason and the Classical Tradition