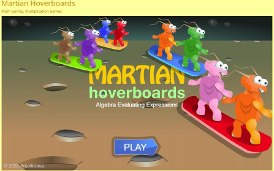 Arcademics® offers free access to a huge range of academic games that allow students to compete against themselves, other students, or computers. Games can be played with a browser or through a free iPad or Android app.

These games are supposed to be for grades one through six, but even pre-kindergartners can start with the games that work on shapes and counting. There are lots of math games covering addition, subtraction, multiplication, division, fractions, decimals, ratio and proportion, integers (positive and negative), and beginning algebra concepts. Other games are for language arts, spelling, typing, and geography. Choosing a subject area and a grade level usually brings up one or more games that are suitable. But it doesn’t hurt to choose a lower level to have students improve proficiency and speed using basic skills.

You can use Arcademics without registering, but the best way to use it is to have a parent or teacher first create an account, then assign students usernames and passwords. The parent or teacher selects games and makes them available for the student. This gives parents the ability to assign games they think will be most effective, and it allows students to earn achievement badges. You can let your child have access to select their own games as well. (I did this with my granddaughter, and she loved being able to choose and try out lots of games.)

The Arcademics site does have some advertisements, but those that appeared while I was reviewing were not obtrusive, and they seemed to be related to legitimate educational services or products. I didn’t see any red flags that would make me cautious about letting a child play on his or her own. However, the Arcademics Plus paid option is free of advertisements—a safer choice.

Players can choose to play a public or a private game. Public games generally mix one or two students against two to six “computers.” This is a new website, and the number of students playing public games will increase as these games become more well known. (My granddaughter told me that she preferred playing against students, probably because it feels more social, but I also noticed that actual players seemed to produce more realistic results.) In a classroom or family, two or more children can compete against each other in a private game.

Games are fast paced and don’t last a long time, so students are likely to play over and over again.

The games are colorful and feature cartoon animal characters as in the illustration. The artwork is relatively simple, but this is a positive feature since it limits distractions.

Most games are races of some sort. For example, in Grand Prix® Multiplication, each player speeds up his or her racecar by answering multiplication problems correctly. In Toad Hop, a geography game in which students identify the capitals of countries around the world, four frogs race to leap to the country that matches each capital city. (Students are choosing from a limited number of countries.) It’s like answering multiple-choice questions, but it’s so much more fun than doing this on a worksheet. There is also another version of Toad Hop for students to play by themselves, which might be less stressful.

Players don’t explode or get killed during a game; they just come in whichever place they earn against the other players or computers. Consequently, the games are less discouraging than ones where players die and have to start over many times. On the positive side, students can earn "achievement badges" and “power ups” to use in games.

The paid Arcademics Plus option allows you to customize games, track student progress, and get printable reports. It provides students with tutorial videos on the problems they miss most frequently, and it allows them to participate in special competitions.

Arcademics is useful for language arts, spelling, typing, and geography, but it is especially good for drilling students on math facts since there are so many math games. My granddaughter needed no urging to spend time with a number of different games, and she didn’t want to stop. That’s high praise for this website, and the fact that you can use most of the site for free is amazing!

Basic - free
Plus - one month free, then $5 a year per student