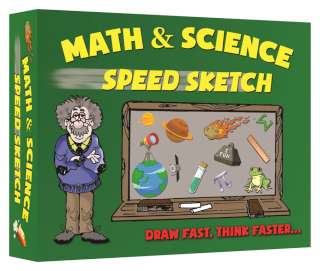 Math and Science Speed Sketch is a Pictionary type game that reinforces or tests players on either math or science. As in Pictionary, you need at least two teams with at least two players per team. On each team’s turn, one player draws a card, rolls a die to determine which question to answer. As soon as they are ready to start drawing, they flip the one-minute timer over so that timing begins. The drawer’s team members must guess what the term is in the allotted time. (You might want to skip the timer at first or if the time limit is too frustrating for players.)

Bonus cards add game elements such as “Try All Four” where the drawer can try to draw as many of the terms as possible for his or her team within the time limit. A “Risk” card can earn or lose a team double points. An “Override” card allows a player to choose any question on the card.

The game comes with two cards decks, with 79 science cards and 47 math cards plus 16 bonus cards. Each science or math card has four terms with a definition or example for each. The first question is worth five points, and the other three questions are worth 10, 15, and 20 points respectively. Higher-point questions are typically more difficult.

Math questions should be answerable for most students working at eighth grade level and above, although you might be able to use at least the first two questions on each card with students as young as fifth or sixth grade. (You might come up with your own adaptation for younger students so that they work with only the easier questions.) Here are examples of questions from one math card with their definition. (Guessers need only say the term and not the definition.)

Roman numerals: Number system invented by the Romans (I = 1, V = 5, X = 10)
Liter: Metric unit similar to a quart
Pint: Equal to 2 cups or ½ of a quart
Rational number: Integer or a fraction

Science questions range across the realms of science from human anatomy to astronomy, and they also include a few practical applications like tire pressure and famous scientists such as Einstein and Newton. While some cards have increasingly challenging terms that all relate to one area of science, others cover the gamut. One card has the terms “ankle, parasite, ozone,” and “cholesterol.”

Drawers can use numbers, symbols, and variables but no other letters. The ability to use numbers and symbols makes it easier to answer many of the math questions. Some science questions might be very challenging to draw or guess. For example, I can’t think of a way to draw “ozone without using the letter “O” or any way at all to draw “Statin: a type of drug used to reduce cholesterol and triglycerides.” Others like “Earth’s core” and “ankle” will be much easier. Players need a broad knowledge of science, and the point at which students will be able to play might vary greatly. Again, consider coming up with a way to use only easier questions with younger students.

You can use only math or only science cards or you can mix them together. (Drawers are allowed to tell their teammates whether a card is from math or science.)

Math and Science Speed Sketch is a great way to review math and science definitions and concepts that is ideal for a small group or a large family. It seems to me that homeschoolers might also adapt it for use as a trivia game without the sketching element: just read the definition and have players guess the term.