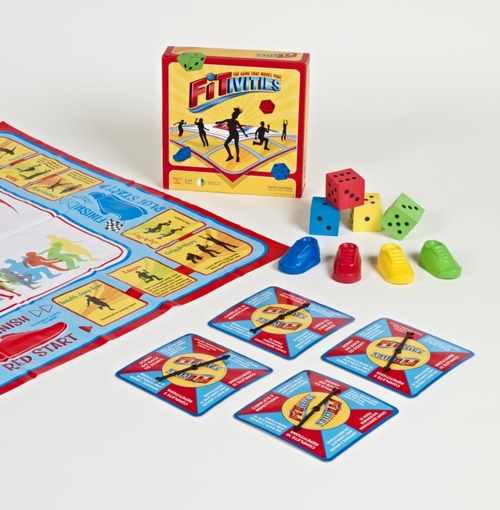 What do you get when you combine “fitness” and “activities”? Fitivities!

Designed by a fitness advocate, Fitivities functions as both a game and a mini physical fitness program. It’s great for players from ages six to adult who can easily get up and down from the floor or ground and are able to jump and squat. (You could make minor adaptations to accommodate players with limitations.) From 2 to 24 people can play at one time by playing as up to four individuals or up to four teams.

A large three foot by four foot plastic game mat serves as the game board. (The mat is made of heavy plastic, so it folds down to a manageable size for storage in the game box.) Each player or team has a spinner, a large foam die (2 inches square), and a foam shoe (3.5 inches long). The game mat has a path for players or teams to follow. Squares have pictures and descriptions of various exercises such as lunges, pretend jump roping, squats, and shadow boxing. Some exercises require players to lie on the floor or the ground. Expanded explanations for each exercise are in the instructions in case you need them.

Fitivities isn’t played like a regular game with players taking turns. Instead, teams or players start at the same time and play as quickly as possible trying to be the first to move their shoe completely around the game board.

An individual player keeps rolling the die and following instructions until their or their competitor’s shoe reaches the end. For teams, players on a team take turns rolling the die and spinning the spinner, but all team members complete each exercise each time. This means that it might work best if the fastest players are split between teams rather than concentrated in one team. However, elements of chance in the game tend to level the teams without this sort of intervention.

On each turn, a player (playing as an individual or representing their team) rolls the die and moves their shoe on the board. Then they spin their team’s spinner. (All spinners are identical, but no team loses time waiting for a spinner to be available.) The spinners have eight sections with instructions such as “Complete 10 repetitions,” “Go back 2 spaces and complete 15 repetitions,” and "Go back to start!" Individual players or teams will then perform the exercise pictured on their game board square the specified number of times. The "wild card” elements on the spinners can easily frustrate the efforts of the front runners.

Now picture this. Say you have eight players on four teams. The four teams will simultaneously be rolling the die, spinning, and doing exercises. You might have all eight players lying on the floor doing plank holds or another floor exercise at the same time! That requires a lot of space, and it requires a surface that is suitable for floor exercises. (Hard cement or asphalt would be rough for exercises where players lie on their backs.) Carpet, wood flooring, and grass are probably your best “flooring” options unless you’ve got exercise mats for everyone. Clearly, you need to think ahead about where you will play since most living rooms and family rooms would require a lot of furniture moving to be suitable. If space becomes a big issue, consider modifying the few floor exercises to something more manageable rather than giving up.

When I first heard about Fitivities, I thought it was a great idea for ensuring that the entire family exercises even through months when the weather makes it difficult to exercise outdoors—a situation many homeschoolers use as an excuse for a prolonged vacation from exercise. Fitivities does provide the solution for indoor exercise as long as you’ve got the space to do it. But you might have to be creative. You might have to have one team stretched out down a hallway for their exercise space or some other less than ideal situation. (The game’s instructions recommend that players be relatively equidistant from the game board so they don’t lose time getting to and from the board, but you can figure out how to make this work.) Games should take anywhere from about 10 to 30 minutes to play, generally it looks like it would take about 10 to 15 minutes for a relatively small group of players.

Keep in mind that players might not be familiar with the various exercises before they begin, so someone might want to demonstrate all of the activities in advance. When I played Fitivities with my grandchildren, we just paused to explain each activity as we came to it... but then they weren't really competing. My seven-year-old granddaughter enjoyed playing Fitivities so much she was happy to just play by herself.

If you are concerned about exercises being done properly, you might want someone (probably a parent in homeschooling families) to act as an observer to make sure players are actually doing each activity correctly. Players also need to understand that they roll the die and move before spinning then they need to spin and read the instruction. Someone on each team needs to be capable of making sure this happens correctly or the observer might assist when needed. Once players master the exercises, play should proceed easily.

The large board and playing pieces simply look fun. Fitivities reminds me most of the game Twister ™, but it doesn’t get impossible as Twister usually does . I think Fitivities might even be fun enough to use as a party game for children. While you can use it on special occasions, I think Fitivities is a great way to sneak in physical fitness without your children realizing they are getting a work out.