Before Austen Comes Aesop: The Children’s Great Books and How to Experience Them 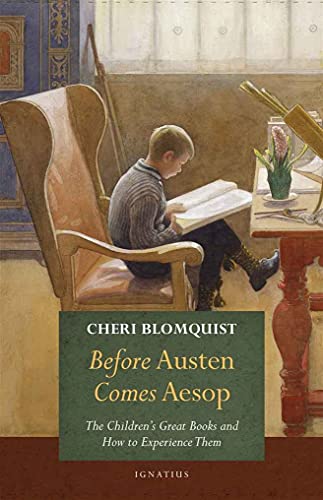 Beyond being a book of recommended literary works, it presents detailed instructions for making those literary works a useful part of your curriculum with options that range from reading the literature for enjoyment and edification to having students do a scholarly study that includes writing a footnoted literary-analysis paper.

She explains the criteria she used for the inclusion of books on her list. She began with the qualities that apply to the traditional list of Great Books—qualities such as universal ideas and themes, contributions to the ideas that have influenced western civilization, layers of richness, and excellent craftsmanship. She added additional criteria of her own:

- The book has played a significant role in the history of children’s literature.
- It has influenced the development of Western literature—children’s, adult, or both.
- It has been valued by young people for much of its existence.
- It has long been considered excellent literature (Before Austen Comes Aesop, p 15).

Blomquist’s resulting list is broader than one might expect. On the book flap we find this explanation:

The Children’s Great Books list includes the classic works that, while not written strictly for children, were orally passed on to them for generations and are foundational for understanding Western culture. These works include Greek and Roman fables, myths, and epics; European legends, sagas, folk stories, and fairy tales; and the Bible. The list also includes the acclaimed works written specifically for children, beginning in the age of the first printing presses and continuing into the late twentieth century.

Blomquist includes many contemporary titles that are highly regarded, acknowledging that they have not yet stood the test of time. On the other hand, she limits the list to books that have influenced the development of western civilization since she believes it is important that children (particularly those living in the U.S.) first understand the roots of their own culture.

Books are recommended for preschool through high school. Think of Before Austen Comes Aesop as an on-ramp that gradually leads readers into the traditional list of the Great Books. Blomquist includes some titles from the traditional list of Great Books, but she usually suggests a number of adaptations for any single work that might be better for younger readers. This is the case with books such as The Odyssey and Gulliver’s Travels. In rare instances, such as with her listing of Robinson Crusoe, she recommends the unadapted book for teens who are ready for it.

The recommendations are arranged chronologically by the era in which each of the literary works was produced. She divides them into seven eras.

The Arrangement of the Book

After introductory information about how to use this book, Before Austen Comes Aesop is divided into two main parts: Part One and Part Two. Part Two is followed by a valuable set of appendices.

Part One presents the recommendations, one chapter per era. For each era, Blomquist identifies her highest recommendations as either foundational (highest priority) or important (secondary priority). She arranges these recommendations in chronological order based upon when they were written or published. For each work, she lists the reading level as well as the interest level since some difficult-to-read books are great for parents to read aloud. For some books, she adds the line “Parents Cautioned!” to alert parents to potential issues. A description of the book follows next, although it focuses more on the work’s importance and why it’s included on her list than on the content of the work itself. If there is a caution, she discusses it here. She concludes each entry with another paragraph under the heading “Virtues and Themes.”

After the entries for the foundational and important literary works, each era has a more condensed section headed “Other Children’s Classics of This Era.” Here she lists many other books, along with the reading level and interest level for each. Once in a while, she includes a sentence or two of commentary.

Parents can begin introducing the great books to children as young as the preschool level by simply choosing books from among these recommendations and reading aloud.

Part Two outlines three different approaches that might be used to incorporate works from the Children’s Great Books list into your curriculum for children who are able to write. Blomquist labels these approaches as the Leisurely Adventure, the Book Club(ish) Adventure, and the Scholarly Adventure. Reproducible pages with instructions, lists, and forms that you might use for these approaches are in the appendices.

The Leisurely Adventure offers two options, one more demanding than the other. In both options, students will maintain a notebook where they record the title and author of each book they read. Under each title, they write notes about their reaction to the book as they read. The first option does not specify the number of books to be read. The more-challenging option, designed particularly for students in grades six through ten, assigns one to five stars per book according to the length and level of difficulty. Students are to choose books with a total equal to at least 20 stars. They will maintain a notebook, write notes for each book, and keep track of the books they read on a log page.

The Book Club(ish) Adventure is exactly what it sounds like: form a book club, even if it consists of only two people. Add food and an extension activity related to the book. A few possible books full of inspiring ideas for extension activities and themed events are suggested as sources for ideas.

The Scholarly Adventure is presented for students at two levels: elementary (approximately grades five through eight) and secondary (high school). Both levels involve extensive activities for developing skills in reading, notetaking, vocabulary, literary analysis, discussion, and writing. The explanation of how the Scholarly Adventure works is so detailed that it takes up two chapters, one for each level. While you can purchase study guides elsewhere that walk students through the study of particular books, the ideas presented here can be applied to all types of literary works. However, tailoring the assignments to fit each literary work requires more work on the part of parents. If this is overwhelming for either the parent or the student, parents might select elements from the Scholarly Adventure plans rather than have their students do everything.

Before Austen Comes Aesop should be a terrific resource for parents who love the Great Books approach for classical education and want to prepare children for it beginning as young as preschool level. Children can gradually learn to appreciate and enjoy great literature rather than being overwhelmed by it.

This book is available in paperback and Kindle versions. Unless you have a way to print out pages from your Kindle reading device, I recommend the paperback since you will probably want to photocopy many pages from it.

Before Austen Comes Aesop: The Children's Great Books and How to Experience Them