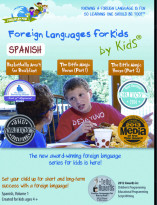 Foreign Languages for Kids by Kids (FLK) has eight levels and serves as an introductory Spanish program that teaches Spanish to children from as young as preschool level up into the teen years. The eight levels are intended to provide a two-year program. You might take more or less time depending upon the ages of your children, but you should not spread the course out much longer unless you are supplying continuous and extended practice of your own. FLK uses a conversational approach, so continuous and regular exposure and practice is essential.

Note that these courses are not intended to serve as a complete high school Spanish course. Rather, the goal is to offer an engaging way to introduce students in preschool through junior high to the Spanish language.

Each level has five or six video lessons that serve as the primary source of instruction. You can select either online access to streamed videos or physical DVDs. (The default is streamed videos, so you need to note on your order if you prefer DVDs.) Two Super Sets include components for the complete program. The first Super Set covers the first four levels, while the second Super Set covers the last four levels. Each Super Set includes videos plus physical products for each level with the Super Set: four workbooks, four teacher guides, four sets of cards, four sets of stickers, and a stuffed animal. Online access adds interactive workbooks, a gradebook, and quizzes.

Videos feature child actors who appear in interconnected skits, thus the “for kids by kids” in the company’s name. The children are of various ages up into the teens. (Note: Those who prefer conservative styles of clothing might be bothered by the teen girls sometimes wearing shorts and tank tops.)

All of the conversations are in Spanish, although those conversations tend to use fairly simple vocabulary most of the time. Skits are orchestrated to emphasize particular words or phrases, sometimes repeating the same vocabulary in a number of different contexts. For example, to teach children how to tell how old they are, one child interviews many different children to ask them their age. Children respond with various phrases so that those who are watching learn not just one simple response but a few possible responses. Words are often overlaid on the videos so that children who are able to read can also see how the words are spelled. Children on the videos speak more slowly than normal Spanish speakers, so it is generally easy to make out what they are saying.

FLK videos were filmed with multiple cameras in colorful settings, and they were professionally edited and produced to include lively background music. Videos are introduced with a flight theme by a young boy dressed as a pilot, and the segments on each DVD are called flights. The flight theme pops up in other places from time to time.

Each DVD has a total run time of about 45 minutes. The publisher recommends that children watch a segment straight through on the first day, then re-watch it a few times so that children have plenty of time to absorb the vocabulary and usage. Each segment concludes with a rapid visual review of the vocabulary that has been introduced in that segment.

In the video segments for the first level, students learn basic conversational vocabulary such as hola, gracias, donde esta? (where is it?), words related to breakfast, pelotas (basketballs), and grande y pequeño (large and small). The next level words relate to lunch and colors as well as other frequently-used words. For example, in the “The Wacky Rainbow Restaurant” the children argue about whether or not they like leche verde (green milk) using me gusta (I like).

Videos are the only essential component, and you can use them on their own. However, the ancillary items provide additional practice, reinforcement, and assessment as well as expanded learning.

When you purchase a course with online resources, you will have access for one year. Online resources include two listening quizzes that can be used by even non-readers to check comprehension. Two reading quizzes do the same thing using written words along with the pictures rather audio. You can have students use either or both options.

Older students—probably at least third-grade level and up—can also use the workbooks for each level, which are subtitled FLK Airlines In-Flight Magazines. Students can use either interactive, online versions or physical workbooks. For the online workbooks, the activities are scored and recorded as students complete them.

These attractive, colorful workbooks reinforce and expand upon what was presented in the videos. They are intended for reinforcement rather than as the student's primary source of instruction.

Each workbook has three sections: Language & Activities, the largest section, includes a little grammar instruction. For example, the first-level workbook explains masculine and feminine nouns and the singular and plural articles that are used with them. Language & Activities have word searches, crosswords, and other puzzles as well as fill-in-the-blanks, matching, circling, and drawing activities.

The second section in the workbooks is a Squisher Comic, featuring Squisher the international inchworm. While the first level Squisher Comic has a brief explanation about accent marks, the others seem to be more entertaining than instructional.

The third section is about culture and geography. The Culture & Geography section teaches children about Spanish-speaking countries such as Peru in the first level and Colombia in the second. They have much more teaching information than the other sections but no activity pages. Squisher Comics and Culture & Geography sections online are not interactive. Instead, they each have their own quiz, generally with only one question that is answered online.

The online material is super easy to use. An older student could work independently through the lessons. While you can use games and other activities described below, they are not essential.

Optional teacher guides make it easy for parents to utilize the various resources. They lay out detailed lesson plans that include the videos, workbook pages, and suggested hands-on activities. They tell when you might use the games, cards, stickers, and cultural lessons as well as other types of interactions. Parents who don’t speak Spanish should also appreciate the vocabulary lists for easy reference. However, teacher guides are not essential. They are most useful if you want to provide an enriched program with games, hands-on activities, and interaction.

Cards for Kids by Kids™ for each level provide vocabulary words and phrases and corresponding picture cards that use images from the videos. Familiarity with the videos is essential since students sometimes need to recall the personalities and actions of the children on the videos to know what word or phrase is being depicted. The deck for each level can be used to play a number of different games as described in the instructions, or they can be used simply as flashcards. As you move from one level to another, using the accumulated flashcards from previous levels is an excellent way to review.

Sets of vocabulary word stickers for each level should be great visual teaching tools for children who can read the words. Children (or adults) can place the stickers on objects around the house to reinforce the vocabulary. Stickers are at least 1.5 inches high and generally from 2.5 to 3.5 inches wide with large lettering, so they are easy to see. Sets of encouragement stickers are also available.

¡Listo! and Dice Off™ are optional games.

¡Listo! Is a bingo game that can be used along with the first three levels of FLK. Rather than starting to play as you begin the first level, you will need to wait to play the game until children have enough vocabulary words mastered. There are 12 unique bingo cards with pictures rather than words. The teacher or parent will call words identifying the pictures from a deck of 26 vocabulary cards. The cards have both pictures and words to make it easy for the parent or teacher who is just learning Spanish.

The Dice Off™ game for students ages seven and up adds another layer of reinforcement that most students are likely to enjoy. Even adults who are learning Spanish might play this game.

You will need two to four players to play the various versions of the game. The game has four individual game boards that each feature different verbs and adverbs that players say and act out. The goal in some variations of the game is to cover all of the squares on your board, while in others the goal is to remove the cover squares. The colorful game components—game boards, verb and adverb cards, colored die, challenge cards, and stickers—are very sturdy and should stand up well to repeated usage.

Dice Off builds on the flight theme with the game boards called “flight manuals” and “pre-boarding” preparation, and game variations for “boarding, taking off,” and “landing.” Students should have completed at least the first level of FLK before tackling the game. If students are not already familiar with the vocabulary, they can learn it fairly quickly during the “pre-boarding” stage. While knowing the vocabulary is important, “Gotcha” and “Faker-Mistaker” cards make play more complex—what happens on one player’s turn can affect the advancement of other players.

The game’s design is unusual. While it takes a few minutes to understand how the various options work, it really is quite simple to demonstrate to children. Players should begin by concentrating on one flight manual at a time, working through variations of the game that become increasingly challenging. While Dice Off was created to reinforce the FLK program, it should work well for students who have worked through the first levels of other introductory Spanish programs since it uses common verbs such as comer, abrir, and leer (to eat, to open, and to read) as well as a few others such as patear and aplaudir ( to kick and to clap). Adverbs and adjectives are very common words such as alto, baja, feliz, consado/consada, bien, and mal (high, low, happy, sad, good, and bad).

There are a number of positive points with the FLK program. It is designed so that it can easily be used by students, parents, or teachers who have no prior exposure to Spanish. All of the Foreign Languages for Kids by Kids materials are of high quality and beautifully presented. In addition, the flexibility of the program is great. Use only the videos or add as many of the ancillary items as you like to create multi-sensory learning experiences. The immersion approach of the videos coupled with the workbooks and other items should be very effective.

You can purchase FLK components individually, but the Super Sets make the most sense and the Super Set Deluxe includes all of the items from Super Set 1 and Super Set 2.

An Early Learner Set for non-readers includes the first three levels of videos (either on DVDs or online), three decks of Cards for Kids by Kids, the ¡Listo! Game, sticker sets, encouragement stickers, a coloring book, and a Squisher stuffed animal.

You can sign up for a free 48-hour trial so that you can check it out before subscribing or purchasing.