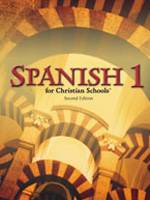 BJU Press's Spanish will be challenging to impossible for a non-Spanish-speaking teacher. While Spanish 1 explains grammar sections in English, some exercise instructions are in Spanish. Then in Spanish 2, even more of the instruction is in Spanish. Another problem that crops up for non-Spanish speaking teachers is that pronunciation instruction appears throughout the book rather than at the beginning. However, you must use pronunciation skills in the early lessons that have not yet been taught.

Both courses include some Christian vocabulary (with a Protestant and missionary emphasis) but, otherwise, they cover essentially the same material as other Spanish 1 courses.

To make things even more challenging, if you are using the teacher's editions (as I recommend), they instruct you to use an inductive, immersion approach. The teacher is instructed to speak only Spanish as much as possible and to use pictures or context, rather than translations to teach meaning and sentence constructions. Students are encouraged to figure out the meaning from usage and applications, rather than memorizing vocabulary and rules. This does not mean that grammar coverage is weak; there is a solid grammatical foundation and the rules are covered.

Spanish 2 follows the same format as Spanish 1, using excerpts from the Bible and cultural/political studies of Latin American countries. A complete third-year course is also available, although I have not reviewed it.

The CDs for these courses are essential, especially for learning pronunciation, whether you teach through immersion or not. The vocabulary reflects Latin American usage rather than Peninsular or European Spanish, although it does include "vosotros" forms in conjugations.

Course essentials for both levels are the student text, the set of CDs, student activity manual, and teacher's editions for both the text and manual. The homeschool kits include all these items plus the tests packet and tests answer key. After looking at many Spanish programs, this one looks very good, but only for parents who already have some knowledge of Spanish.

Important Note: Review is of the first editions. I have been told that the second editions teacher editions for this Spanish series have been revised to include English translations and tips for homeschooling parents that make them much easier to use. These new teacher editions should still be compatible with first edition student texts.

You might want to check out the premade lesson plans from Homeschool Planet that are available for the BJU Press Spanish courses.