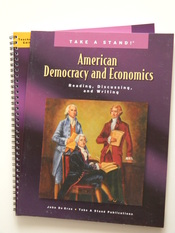 The Classical Historian publishes the Take A Stand! series of books that might be used either as core or supplemental resources for history studies for middle school through high school. One title deals with government and economics, so I’ve created this separate review page to make sure it does not get overlooked.

American Democracy and Economics follows the same format as the other Take A Stand! books with a “reading, discussing, and writing” approach. While the title includes “Economics” the coverage is primarily on government with economics studied in light of the structure of government. While it can be used at junior high level, I would personally save this to use for a high school course since it's such a great way to teach the subject.

This can serve as your core resource (without a text) if students are ready and able to search out all their own sources to learn about the listed topics for each assignment. For example, in the first assignment, before discussion or writing, students need to become familiar with twelve topics: Athens, Athenian democracy, Plato, suffrage, citizenship, Pericles, Roman Republic, Judeo-Christian, the Ten Commandments, equality, the Stoics and “law of nations,” and Roman law. Students might have a core textbook to save some research effort, but they will still need to do additional research on some topics. They will also need to read directly from primary sources such as the Declaration of Independence and the Constitution for other assignments. This is not a canned curriculum, but one that requires students to really develop independent learning skills. Completing American Democracy and Economics assignments should provide a semester credit for Government as well as significant credit toward English language arts because of the extensive essay writing involved.

The topics seem very broad, but each essay assignment has numerous sub-questions, a list of terms with which students need to become familiar, and other prewriting assignments that help to narrow the focus to something manageable. Topics are not designed to advocate for particular opinions. Instead, the author challenges the students to judge the creation of the American government, the limited free market system, and to determine the proper role of beliefs, religion, and political institutions in American society and economics by using the tools of the historian and analyzing primary and secondary sources. Parents/teachers might inject additional information if they want to include or advocate another point of view or other ideas besides those likely to come up in the directed student research. Once the teacher has become familiar with this method of teaching and learning, he or she might want to add or change topics and should be able to easily do so.

Those who like classical education methods should find this a perfect fit.

$49.95 per set (one student edition and one teacher edition)