Indicates that the item was selected as one of Cathy’s 103 Top Picks for Homeschool Curriculum.

The traditional handwriting method most of us learned in school is used by A Beka, Concerned Communications (A Reason for Handwriting), School of Tomorrow, Christian Liberty Press, and Alpha Omega, while BJU Press and Rod and Staff offer the slant print method. Rod and Staff prefaces the learning of slant printing with the traditional ball and stick, resulting in a "two-transition" handwriting curriculum—ball and stick to slant print to cursive. A Beka Book offers the option of either manuscript printing or cursive for kindergarten. More publishers using traditional forms have gravitated toward cursive forms that drop the initial loops on upper-case letters (e.g., Zaner-Bloser's method), making them much closer to some of the simplified cursive forms. So some of the distinctions between traditional and simplified cursive styles are not as clear as they used to be. 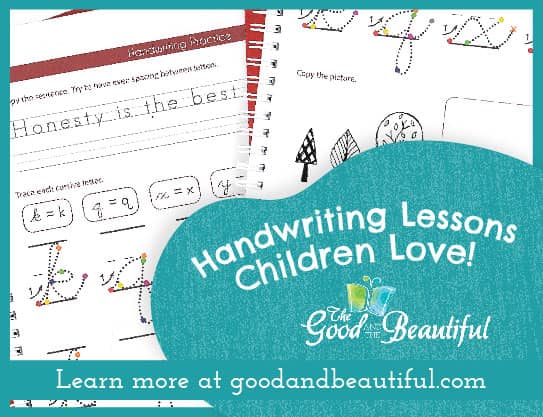 Handwriting Without Tears (HWT) teaches handwriting for children in kindergarten through fourth grade. Some distinctives of this program are: uppercase letters are taught before lowercase groups of letters that have similar strokes or the same starting points are taught together letters are not slanted for either printing or cursive multi-sensory learning methods are used for instruction HWT’s style is simpler than traditional cursive, but it differs from most of the other “simplified cursive” forms in that there is no slant and some of the letters such as “e”, “f”, and “k” change form from printing to cursive.