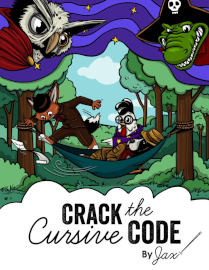 Crack the Cursive Code teaches cursive writing in the context of a cartoon adventure story. The publisher’s website describes it as a “Cursive Writing story/coloring/workbook."

The course is very creative on many levels, but I think the story is the feature that makes this course much more interesting than many other options.

It features cartoon characters in the ongoing story. Fox, Chicken, and Dog decide to play dress-up as the characters Eat N. Hunt, Lord of the Wings, and Indie ‘Napper’ Bones, respectively. They open an old scroll that they are unable to decipher, and thus starts their amazing adventure as they suddenly find themselves on the deck of a pirate ship that later transforms into a submarine, then a hot air balloon.

Along with the text and story illustrations, each page of the story highlights two letters in cursive, Introduced by the Lord or the Wing's magic wand—for example, a and b, with arrows indicating the direction and steps to follow in forming the letters. The cursive style taught in this course is fairly standard, although it simplifies things a bit by dropping joins after some of the uppercase letters such as B, F, and O.

The letters are taught in alphabetical order, and the 1,000-word story employs alliteration within each story section based on the letters being taught. For instance, as students learn about the letter g, one sentence of the story reads, “The underwater boat gracefully glided toward the sun that glistened on the ocean’s surface.” The letter h follows with sentences such as, “The dog hastily hung a hammock and had his head down in hardly any time at all!”

In addition, the book uses the sentence, "The quick brown fox jumps over the lazy dog” to provide practice for writing all lowercase letters. Students will both trace and copy this sentence a few times. A few extra lined pages at the back of the book can be used for whatever practice you wish. Utilizing those pages is important since otherwise, students don’t get enough practice writing without tracing the forms.

I expect that many children will love to color the black-and-white story illustrations, and there are additional coloring pages for the story characters.

Some parents are ambivalent about teaching cursive handwriting, but Crack the Cursive Code might be appealing enough to tip that decision in a positive direction.