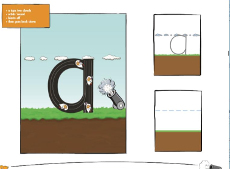 Handwriting Heroes teaches beginning printing via digital files (downloaded) along with free online videos or an inexpensive iPad app. You can purchase the Endless Bundle that contains both essential and optional files, or you can buy individual files. In this review, I describe the components of the Endless Bundle.

Handwriting Heroes concentrates first on lowercase letters since they are used most frequently. It characterizes letters in groups, associating each group with a Handwriting Hero cartoon figure such as the Surfers, the Skydivers, the Bouncers, the Cannon Pops, or the Skiers. For example, v, w, x, and y are the Skiers since they all have a line that goes diagonally downward.

Multi-sensory methods help children learn more effectively. Children first watch the animated presentation. For example, for teaching lower case d, the instruction begins with the same instruction as for the letter c, since this is the form common to the Cannon Pops group: “d taps two clouds, curls ’round…” Then it adds the variations to form the letter d: “d taps two clouds, curls ’round, leaps to the top, gets dizzy, goes back down.”

Next, the parent or teacher demonstrates how to write the letter. Children “skywrite” the letter using both arms, elbows, or their head to exaggerate movement and build up body memory of how the letter is formed. Then they finger trace the letter while describing their movements. Finally, they practice writing letters on paper.

The videos for each group of heroes (either online or on the app) present an animated song that shows the common movements for the group of letters then briefly summarizes special movements for each letter. The animated videos continue with presentations about each letter individually. While a parent or teacher could teach this without the videos, it makes sense to use them as your primary source of instruction for children.

It should take about five weeks to introduce all of the lowercase letters. According to the suggested schedule in the Lowercase handwriting practice workbook, you should introduce the entire video on Monday of each week then spend the rest of the week practicing, repeating the same worksheet each day. Each week, worksheets review all letters taught up to that point, although students do not practice writing words. While you can print out multiple copies of each worksheet page for the week, the author suggests either laminating them or placing them in dry-erase pockets and using a dry erase marker. Personally, I prefer that children write directly on paper with a pen or pencil rather than with a dry erase marker (or other “fat” implement) since they feel different and produce different results.

If you want to start with a preschooler who doesn't yet have the fine motor skill for writing with pencil and paper, rather than starting with Lowercase, you can use Pre-K Printing. Pre-K Printing also teaches the formation of lower case letters, but it uses methods suitable for young learners. Children form letters in the air with finger puppets, trace letters with their fingers, create rainbow-colored letters with crayons or markers, and punch holes in letters with a push pin as they follow lines of dots to form letters. Children will use the same videos and songs that are used with the Lowercase handwriting practice workbook.

One of the files in the set, Line Picker Assessment and Paper, offers a simple assessment tool plus options of printable paper with lines of three sizes. You can choose what size lines best suit each student. After students have completed lessons in the Lowercase handwriting practice workbook, they should use one of these pages to practice writing the lowercase letters as neatly and quickly as they can. The Alphabet Writing Speed file has forms for recording student progress in speed and accuracy.

The Lowercase Letter Cards file has pages that need to be printed out, some double-sided. One page is to be copied and cut into letter cards, which will then be used for games and word-building practice. Other pages provide additional parent- or teacher-directed practice. A separate file shows letter formation for lower-case letters unique to the Spanish language.

A free Handwriting Heroes font is available for download from the website. You could also use this font to create your own practice pages for children since copying provided models is a time-proven method for achieving fluency.

Some of the other files seem less useful to me. The Lowercase Activity Cards file repeats the workbook pages showing words to the songs and formation of each letter but in a slightly larger format. Another file has lowercase letter wall cards that can be printed and displayed. A poster shows the five groups of lowercase letters.

The Uppercase handwriting practice workbook is used to teach uppercase letters rather than videos and songs. Cartoon illustrations are used to support instruction instead. For example,  a cartoon of otters seated at a restaurant table ordering olives is the illustration as students copy the sentence “Otters order olives.” This workbook stresses the starting place for forming each letter as well as the directions to follow for the rest of the letter’s formation. The Uppercase workbook has significantly more writing practice than the Lowercase workbook since it presents individual lessons with worksheets for each letter and includes practice writing words and sentences. There is no suggested schedule for this workbook, but it seems to me that one or two days per lesson should be appropriate. Similar methods of presentation are used in a separate Numbers Worksheets file to teach the formation of numbers zero through nine.

Artwork throughout all of these resources is very attractive and professional. Most files are in full-color, so you will need access to a color printer for the best results.

A clickable catalog explains all of the Handwriting Heroes resources--which they consider essential and which are supplemental. It seems to me that you can save money by picking and choosing files. Here’s my recommendation. The workbooks for lowercase and uppercase letters, the number worksheets, and either the free online videos for teaching lowercase letters or the inexpensive iPad app seem the most critical components. If you are already confident about teaching about posture, how a student should align paper on their table or desk, and how to hold a pencil, you can skip the “Get Ready to Write” document. It should be easy enough to come up with methods of practice, but if you want help, add Print Practice.

Many handwriting programs for homeschoolers have shifted toward copywork and have diminished the amount of instruction on letter formation. Handwriting Heroes shifts the opposite direction, doing an excellent job of teaching proper letter formation up front so that children don’t struggle with the mechanics, then they offer other resources for developing greater fluency.