Ann Voskamp has written the first two books in a series of geography texts for children in grades one through six (grammar stage) while Terri Johnson has written the third and fourth volumes. The influence of V.M. Hillyer, author of A Child's History of the World and A Child's Geography of the World, is evident. Like Hillyer, Voskamp and Johnson write with an engaging style, directly to the student:

You might have noticed the reference to God. In contrast to Hillyer's books, this series is Christian in perspective, especially in the first two books. The Christian worldview shows up through the text material, the "Excursion" activities, and especially in the "Reaching Out to His World" activities in the first two books. The last two volumes are less visibly Christian. They each have an optional prayer guide, and there are occasional spots in the texts that are clearly written with an assumption that the audience is Christian.

Books are printed in full color on glossy paper, with photos, drawings, and other graphic elements contributing to a first class appearance. Each book includes a companion CD-ROM that has copywork passages and templates for students to use, tests, and other printable pages that vary by volume and will be described later.

The first book has 11 lessons, while the second has 16, and the third has 15. Depending upon how you schedule lessons, the first book might take up to 22 weeks to complete, a bit less than a full school year. This is fine for a subject that is intended to be supplemental at these grade levels. The second and third books take a bit more time and will likely take up one school year. It is possible to squeeze any of these books into a one-semester course, but I recommend taking a year with each course. Various scheduling options are described in the introduction to each book.

The books differ from each other enough that they need to be described separately.

Explore His Earth, Volume I

Explore His Earth (Volume I) has a total of 243 pages—168 in the book, the rest on the CD. It is printed with a larger font than the second volume. The combination of the larger font and slightly fewer pages than the second volume results in significantly less lesson material (text) to be read with students. However, this volume has lots of "Too-Fun-to-Resist Excursions!"—two per lesson. These are mostly hands-on activities such as constructing a papier maché globe or conducting a relatively simple science experiment. These activities are especially good for children in the early to middle elementary grades who generally need more hands-on learning. Each lesson has a "Tell the folks at home all about it!" activity that is actually a narration. Prompting questions for the narrations are provided. In addition, for each lesson children create an oversize postcard using templates from the CD-ROM. Postcard creation serves as a "notebooking" activity. These are to be collected together with a single ring for review and reference.

One of the important reasons to study geography is to understand other people and their cultures from God's perspective and to develop a loving concern for them. To that end, Voskamp includes a "Reaching Out to His World" activity at the end of each lesson. It discusses a topic such as homelessness, how earthquakes affect people's live, and the activities of Mercy Ships, and then suggests prayer and/or actions in response. Additional resources such as books and videos are recommended under "For Further Exploration."

Copywork selections on the CD-ROM include excerpts from the text, definitions, biblical quotes, poetry, and occasional quotes from other sources. Copywork forms are provided in four different formats to suit younger and older students and to allow the option of adding a drawing. Maps on the CD-ROM include both labeled and unlabeled versions. In addition, there is a "Tectonic Plate Puzzle" plus a quiz for each chapter. 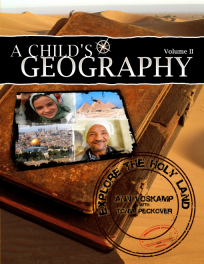 Explore the Holy Land (Volume II), co-authored by Tonia Peckover, shifts into more content and adds significant cultural studies as students learn about Turkey, Israel, Egypt, Iraq, Saudi Arabia, and Jordan. Study of each country is divided into two or three sections, so the material goes quite in-depth. Reading material even within each lesson is split into sections to keep it manageable. This volume uses "Field Notes" rather than "Tell the folks at home all about it!" for students to narrate what they have learned after each section of reading. Rather than postcards, students create a "Travel Log" with map work and notes from their studies. These should be collected into a notebook. A "Bringing it Home" section at the end of each lesson suggests resources for related art, music, and books, plus an occasional poem or recipe to try.

Culminating each group of lessons on a country is a "Go into all the world…" prayer for the people about whom the children have learned. You might have noticed that this volume lacks the "Excursions"—experiments and hands-on activities—of the first volume. While there are map work, narration, and drawing activities, as well as the occasional recipe to cook up, there's a definite shift toward a more "academic" approach.

This book has 192 pages plus another 87 on the CD-ROM. The CD has copywork, maps, and quizzes like those for Volume I. Instead of Postcard templates, it has Travel Log templates, again in four different versions. It also has the recipes that are in the book formatted in "recipe card" size for easy printing.

Explore the Classical World was written by Terri Johnson. As you would expect, her writing style differs somewhat from that of the first two volumes. Yet, there's a natural progression. As the second volume became more academic in tone, the third continues that progression while retaining a "conversational" writing style. Explore the Classical World presents more information on each topic than the first two books, but it does so in the fashion of a narrated travel log where the reader (or listener) is coming along for the ride. Because of both vocabulary and content, it is probably best for students in about fourth grade through middle school.

Explore the Classical World is a fascinating, modern-day geography and culture study of Greece, Italy, Macedonia, Albania, Montenegro, Serbia, Bosnia and Herzegovina, Croatia, Slovenia, and Malta, but it also brings in historical information from time to time. It would be ideal to complete this volume while studying Ancient Greece and Ancient Rome.

Chapters each include one or more section breaks that conclude with "Field Notes." Each Field Notes assignment addresses two or three topics from the section students have just read with one or more questions for each topic. Most of the questions are for comprehension, but a few ask for subjective responses. Responses are to be written in a notebook rather than used for oral narration.

The CD-ROM (which can be used without the print edition of the book) includes the complete text (with weblinks), activities, recipes, extra reading suggestions, lists of timeline entries for each chapter, a country-by-country prayer guide (similar to the book Operation World), an 11" x 17" map of the classical world, "Travel Log" lists of map entries for students to add to maps, and both labeled and unlabeled maps to be used with the Travel Log or for other purposes.

Activities are sometimes links to websites for the actual activity instructions. Some are simple such as listening to a Sonata or watching a video about glass blowing, while others like painting a fresco, making a mosaic, creating a tourist brochure or making an ancient Roman costume are much more involved. There are one or more activities from which to choose for all but chapter 14.

Recipes are included for most but not all chapters. Many of these are challenging—e.g., making Baklava—so the recipes definitely require parental assistance.

The publisher sells a large, 22" x 34", three-color map of the "The Classical World" that makes a great visual aid. It sells for $9.95, but you save $5 if you purchase it with the softcover book through their website. 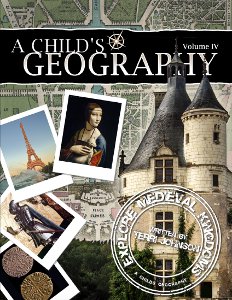 The fourth book continues the narrated travel log style of the third book, but this time exploring many of the European countries that come to mind when we think of the Middle Ages. We travel to Spain, Portugal, France, Switzerland, Austria, Germany, Belgium, the Netherlands, and a number of small kingdoms. While this is a modern day travelogue, Johnson inserts some history along the way, jumping back even to ancient times and sometimes revisiting events from the twentieth century.

While the entire series is intended for the elementary grades, I think this book is best for students in grades four through eight. It touches upon so many historical events and cultural experiences with which younger children are not likely to be familiar that they will probably find it difficult to follow along. On the other end, the reading could be of interest even for teens and adults interested in European countries, so it can easily serve for students up through eighth grade and maybe beyond.

Each section concludes with a set of questions that include some recall type questions as well as some that require a personal response. Vocabulary words are printed in a bold font. These words are included in a glossary at the back of the book.

Additional resources are available on on A private web page on the publisher's website. (The link is in the introduction to the book.) Here you will find maps (both labeled and unlabeled), map activities, My Passport Travel Log (for creating a pretend passport), timeline events and pages, extra reading recommendations, authentic recipes, hands-on activities, and a prayer guide. (Note that the other three volumes will gradually drop the CD-ROM in favor of private web pages as has been done with this volume.)

For all four books, younger students will need parents to read the text to them and discuss new or unfamiliar vocabulary. These are not written on a third or fourth grade child's reading level. Older students might be able to read and complete some of their work independently, but narrations, activities, cooking, and experiments obviously require interaction with parents. These books should work best for a family that reads and works through the lessons together. All four volumes are available as printed books with CD-ROM included, but they are also available from the publisher's website as downloadable ebooks.

Prices range from $24.95 to $39.95 with significant discounts for downloadable versions.