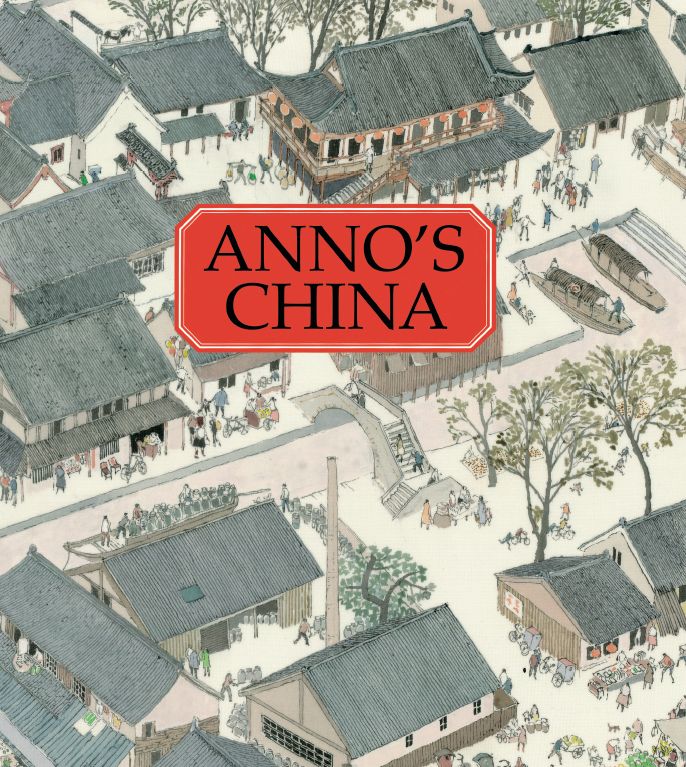 Mitsumasa Anno created this delightful series of books that were first published in Japan and are now being published in the U.S. by Beautiful Feet Books. The books in the series are Anno's China, Anno's Denmark, Anno's Italy, and Anno's Spain.

These are picture books, but with very detailed illustrations, each on a two-page spread. The illustrations convey all sorts of information about the geography, history, and culture of the featured country. Anno sometimes inserts whimsical elements or makes visual connections to literature, art, architecture, religion, and history. The scenes are very complex with many events occurring simultaneously. You have to look at every part of the image to find all of the sometimes surprising elements.

There is no text on the pages–just the illustrations. However, the author's notes for every scene are at the back of each book. Some details are explained in the notes at the back of the book, but much will be left to your own speculation. I love this aspect since children (and adults) need to look closely and think about what they see, then try to come up with their own explanations and ideas about what is happening—fabulous opportunities for the type of picture study Charlotte Mason recommended.

From this description, you might think that these books are just for children, but adults might enjoy exploring the details of the drawings as much as or more than children. Also, adults generally have the broader knowledge that will help them understand some of the allusions that Anno incorporates into his drawings. Parents might explain some of these to children, but it might be wise to wait and see which images they ask about rather than explaining everything. Revisiting the books at a later date can allow opportunities for more "Aha!" moments.

China is a huge country, so in Anno’s China, Anno narrows the focus by creating detailed watercolors of places in imaginary encounters as you follow China’s Yellow River upstream. In a sense, this is a timeless book rather than a snapshot of a certain era. There are horses, carts, and camels but no automobiles. It looks like China might have looked in past centuries, and maybe for many centuries prior to that.

In one scene we see the yard of a farmhouse as we look across the river. Family members are drying rice and carrying hay. Washed clothes are hung to dry on a boat and on tree limbs. Another scene shows busy traffic on a narrow floating bridge across the river while next to it we can see construction in progress on a large arched bridge. Meanwhile, a large boat is heading toward a collision with the floating bridge. There’s consternation on board the boat as well as on the bridge. Men on shore haul on ropes tied to the boat, apparently trying to pull it to shore. In other scenes, we encounter major landmarks such as the Great Wall of China.

In Anno's Denmark, Anno incorporates characters and events from Andersen's Fairy Tales in every scene. For example, the fourth scene includes features such as a plowed field, a building under construction, a small round church, a farmhouse with a well, a crude glassblowing factory, and lots of people going about their business. In the center of the scene is a blacksmith with his forge, and the blacksmith appears to be conversing with a giant beetle. As the notes explain,

In "The Beetle Who Went on His Travels," [one of Hans Christian Andersen's tales] a vainglorious beetle asks a blacksmith to make him a pair of golden shoes that he believes will make him as respectable as the king's horse, but in vain. However, after many humiliating adventures on his travels, the beetle returns home as conceited as ever.

Because of these connections to fairy tales, Anno's Denmark is more whimsical than the other books in the series.  Even so, the background scenes are inspired by actual places such as Tivoli Gardens, the town of Nyhavn, the square in front of the palaces of Amalienborg, and the Castle Kronborg.

I highly recommend reading at least some of the related fairy tales while you explore this book.

Anno's Italy includes unexpected allusions to biblical stories about Jesus, children's stories such as Pinocchio and Cinderella, artworks by Michelangelo, and movie stars such as Sophia Loren and James Dean. The second scene, for example, shows a house in the country. Walking out of the woods at the top of the scene are images of Adam and Eve in the same style as in Michelangelo's "The Fall of Man and the Expulsion from Paradise" scene in the Sistine Chapel. In that same scene, the Annunciation is depicted with an angel appearing to a seated Mary outside the house. In the next scene, a small Italian farm village shows Mary, Joseph, and baby Jesus in a stable with three "wise men" riding horses in the distance.

In a later scene, Pinocchio is portrayed with an intricate arrangement of flower petals on the street during an Italian flower festival This same scene has a triumphant arch modeled after the Arch of Constantine in Rome. Classic examples of Italian architecture from the Roman and medieval periods are mixed with distinctly Italian city and country scenes.

Soccer, bullfighting, flea markets, Catalan folk dancing, and the Running of the Bulls at Pamplona are among the activities in scenes in Anno's Spain. Scenes often feature national landmarks and famous architecture, such as the Alhambra, the Cathedral of Seville, Santiago de Compostela, the Aqueduct of Segovia, and the Basilica de la Sagrada Familia. For instance, in one scene soccer is played on a field within the medieval walls of a UNESCO World Heritage site outside of Avila.

Anno conveys Spain's Catholic heritage with images of churches, pilgrims, and processions. Literature and art come into play as well. In the seventh scene, olive groves, bulls, and windmills are the backdrop for some events from the story of Don Quixote. Scene 18 shows a horse market and an outdoor art exhibit. And the art exhibit has works that mimic those by Spanish artists Dali, Velazquez, and De Goya.