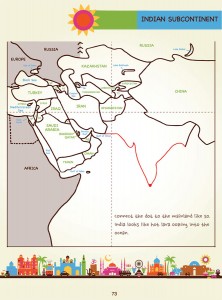 The Draw Map series consists of nine books that teach students how to make outline maps. Titles are:

Draw the World is probably the best starting place for younger students since it teaches the placement and relative size of the continents and five oceans. It has students draw the entire world, but it does so by simplifying it. For example, it doesn’t identify individual countries except Australia since it takes up a continent.

Some of the books (World, Asia I, Asia II, Oceania, and Mexico, Central, and South America) have children fold their paper into quarters (or eighths in World) to create a grid that will help with placement. Each book then helps students draw from a beginning point, gradually “building out” their maps.

Students will draw their maps on their own paper—either 11” x 17” or 8.5” x 11”. While students are not directed to label their maps, it would probably be a good idea to have them do so as they complete each section. On the other hand, if they want to color their maps, you might have them label them after they color. You might want to challenge older students by requiring them to use another map for reference and add details to their map.

I especially like the books that use grids since students are continually checking where they are drawing in relation to the grid. If you are working in one of the books without grids, you might have students work on larger paper to make sure they don’t run out of space.

Even though Draw Map books other than Draw the World have more detail, the amount of detail is still fairly minimal. For example, while Draw the USA includes the Great Lakes, it does not have students include state capitals, rivers, or mountain ranges. Boundary lines are generally shown with lines much smoother than would be drawn if one were trying to be more accurate.

Author Kristin Draeger explains and shows what students are to draw a step at a time. Her style of writing is casual and non-technical. For example, in Draw the World, when students are completing their drawing of Africa, Draeger says, “This last bit of Africa has a horn-like thingy that sticks out to the east. It is a peninsula called, appropriately, the Horn of Africa” (p.35). The drawing to the right shows the line for the Horn of Africa drawn in red. An arrow pointing to this is labeled: “horn-like thingy.” In addition, full-color used throughout the books makes them more attractive than some other map-making resources.

An older student might be able to work through an entire book in a few sittings, while a younger student might do just a few pages at a time. Books are not consumable, so you should be able to use the same book for the entire family.

Because they don’t require a lot of detail, the Draw Map books are a good starting place for students in grades three through eight to learn geography. Draeger makes the process very easy to follow.