Geography I and II 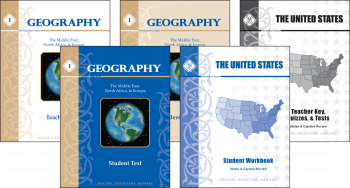 The goal of both Geography I and Geography II is primarily to learn the names and locations of countries and their capitals. Courses also teach some brief history about each country. For each course, there are three components: a student text, a workbook, and a teacher guide. Only the workbook is consumable unless students color in the flags in the Geography I Student Text.

The content of the student texts for the two courses is similar in layout but with some minor differences. Each course is presented in units that each cover groups of countries. Two pages introduce each unit with an overview. Then each country has a two-page spread, one page of which is a map. Maps include only the names of countries and their capitals plus a few major features such as rivers or mountain ranges for some countries. More details are provided in the text, photos, and charts.

In Geography I: The Middle East, North Africa, & Europe, the text for most lessons is presented in two parts: “History's Headlines” and “Tour of Today.” Given that Memoria Press resources support classical education, the History's Headlines sections frequently make connections to the ancient world, especially to the ancient Roman Empire. (Students will identify the ancient name of each country in their workbooks.) A chart of “Fast Facts" for each country lists information such as the capital, the language, major cities, the population, religion(s), landforms, bodies of water, climate, resources, and an explanation of the country's flag. The same page includes a blackline drawing of the country's flag for students to color using the full-color flag images at the back of the student text as a key. (Coloring the flag is the only “writing” done in the student text.)

Geography II: Sub-Saharan Africa, Asia, Oceania, & the Americas presents information a little differently. Each lesson often includes more than one country, and details are provided for selected countries or for regions rather than for every individual country. As in Geography I, there are two-page introductions for each unit followed by two-page lessons. The two-page lessons have charts with data on the selected countries, but charts include only capital cities, languages, population, and terrain. The text for each lesson begins with a “Did You Know” section with bullet-pointed geography or historical facts. Most lessons include one or more paragraphs specifically about the geography. Often there is another section that might be about history or current events.

Workbooks for both courses have the same maps as do the texts but maps are unlabeled so that students will enter the information using words from a word bank. In the Geography I workbook, there is generally one page per lesson with the map taking up about half of the page. The rest of the page has lines to enter facts presented in the student text. The Geography II workbook typically has a two-page spread for each lesson because there are more facts to enter since lessons each cover more than one country; maps take up a full page in each lesson. Most of the information to be filled in is predictable, but “Fun Facts” can be selected by the students and will vary. Review lessons for each unit are included in the student workbooks.

Teacher guides for each course are identical to student workbooks but have overprinted answers and map labels. They do not include all of the information in the student texts. Quizzes and tests are at the back of each teacher guide along with answer keys.

Geography I and II do not require any additional research or resources. Teacher guides have brief teaching instructions that describe a teacher interacting with students. Part of a teacher-led lesson would include discussion about whether a country's boundaries are natural (formed by a river, body of water or mountains) or manmade. However, aside from discussion of boundaries, it seems to me that all other lesson material can readily be gleaned directly from the student textbooks. Consequently, I expect that most homeschooled students will complete lessons on their own, working independently.

These are not comprehensive geography courses such as those that include significant study of each culture along with more in-depth study of geographical features, climate, and resources. Rather, they are intended to familiarize students with the location of and basic information about each country and its neighbors. Geography I and II courses will require very little time to complete, and the review courses will take even less time.