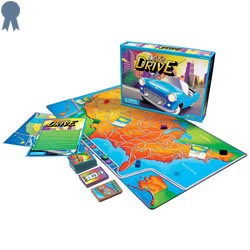 Let’s Drive helps players become familiar with U.S. geography, but strategy and critical thinking play a larger role. It incorporates elements of some of the much more complex strategy games--elements such as drawing destination cards and moving around a map. However, there’s no money and no serious math involved. This means that players as young as eight or nine should be able to play, yet the game is complex enough to interest adults as well.

As with other SimplyFun games, the board and playing pieces (even the box!) are gorgeous and solidly constructed. The board comes folded into two parts, each of which unfolds four sections. The full board is 28” by 17”.

From two to five can play, and the game should take at least a half-hour to play unless you decide to extend play which I think you will want to do.

Destination cards include state capitals, major cities, and scenic locations throughout the United States plus Montreal and Toronto in Canada. Event cards mix with destination cards to add random elements to the game that might be positive or negative for players. For example, one event card says to gather destination cards held by all players in their hands, shuffle and re-deal them, thus disrupting every player’s planned routes.

As players reach each destination, they score that card. Destination cards are also color-coded. When players accumulate three of any color they can exchange them for a bonus card that might score points or provide some other advantage.

Players move by following “paths” marked on the board or by flying between airports. While this is a geography game, the locations of roads and airports do not accurately reflect all real-life options and routes by any means—there are only nine airports on the board! Routes and airports were designed for playability rather than to show how one might actually best travel between locations.

Players can rack up points quickly, sometimes even scoring three points in one turn. The game is supposed to end when one player has advanced his or her scoring chip to the 16th space on the scoring track at the bottom of the board. If playing with just a few players, you will have hardly dented your destination card deck, and you might want to continue playing. Simply have players return to the start of the scoring track and keep going.

It will take a few minutes to read through the rules and learn how to play. A “Quick Rules” summary is on the front page of the instruction booklet for those who want to jump in quickly without grasping all of the details. The next three pages of the booklet provide the details you’ll need to know. One important thing to remember is to score points immediately from destination cards and bonus cards.

Let’s Drive is more complex than most children’s games, but it nicely fills a niche for children, teens, and adults who want some complexity but not as much as in games like The Settlers of Cattan or any of the Empire Builder games. I thoroughly enjoyed playing this game and will certainly be playing it again with both children and adults.