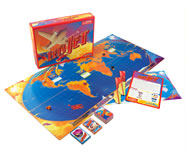 Let’s Jet! is a world geography game for ages eight and up. It is very similar to Let's Drive, another SimplyFun game where players travel only within the United States.

The game board comes in two, folded parts that fit together like a puzzle making a large 18” x 36” board. Players have airplanes to move, a scoring chip for each player that is moved along the bottom of the board to track points, and a distance ruler that shows how far they can fly in each turn. Travel cards identify cities within countries which players must visit.

Identification of cities forces students to think beyond simple country boundaries. A fact sheet included with the game lists cities alphabetically and identifies each with a number that corresponds to the country in which it is found. On the reverse side is a map showing countries with their numbers.. Numbers also correspond to numerically arranged boxes with information about each country including the continent where is it is located, except in the case of islands.

Let's Jet lays out two sets of rules for a basic game or an advanced game. Following the basic game rules you can set up and play this game fairly quickly. The advanced game rules add complications and enhancements that you will likely want to add after children have had an initial introduction to the game.

In the basic game, players use only travel cards trying to get to one or more cities on each turn. To do so, they need to identify their target locations identified by three “public cards” that have potential destinations as well as three cards they hold in their hand. They need to think strategically about routes and distances.

Event, Weather, CoPilot, and Bonus cards used in the advanced version make the game more unpredictable with both positive and negative events as well as opportunities to benefit from another player’s move. For example, some Bonus cards give you extra jet power for longer flights. CoPilot cards score extra points for a player when someone else needs to travel through a city for which they hold a target card in their hand. Also, players watch the color coding on cards they collect for cities to which they've traveled; three cards of the same color earn them a Bonus card.

There are many more details to pay attention to in the advanced version. You might want to first add Event, Weather, and CoPilot cards, then add Bonus cards at a later time as an interim level of difficulty. However, the advanced version of the game is likely to be the most fun for older children and adults. The more unpredictability in the game, the more interesting it will be to play it over and over again.