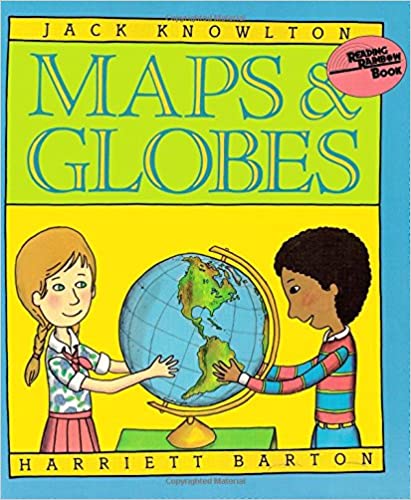 Maps & Globes is a 42-page book that is recommended for ages seven to ten, according to the publisher. I encountered this book as part of Sonlight K: Exploring American History, a program for kindergarten. While some pages toward the end of the book on topics such as the scale of a map, latitude, and longitude might be too advanced for kindergartners, most of the book will be great for children down to age five. On the other end of the scale, I think the book is too young for nine- and ten-year-olds.

Full-color illustrations take up the majority of the space. These illustrations use cartoon-like drawings with simplified globes and maps that are perfect for young students. The text and illustrations provide just enough information for children to understand something of the history of mapmaking, different types of maps, the role of explorers in helping to map the earth, and how we use maps.

This book introduces terms like north, south, east, west, equator, Northern Hemisphere, and Southern Hemisphere. It will help if you have your own globe and a flat map that includes your location so that children can see and think about these terms in relation to where they live. You might also help them identify the direction from your home where people they know live—north, south, east, or west.

The book has one error that I think should be pointed out and perhaps discussed with children. On pages six and seven, it says, “Until a few centuries ago, the earth was neither fully explored nor accurately mapped…. At this time, most people still believed that the earth was as flat as a pancake.” Even though today there remain enough believers in a flat earth to hold a conference (the third annual Flat Earth International Conference in Dallas, Texas), it is a gross exaggeration to say that most people in the 1700s still believed it. After all, Magellan circumnavigated the earth in the early 1500s.

Despite that one exaggeration, Maps & Globes serves as a great introduction to geography for ages five through eight.