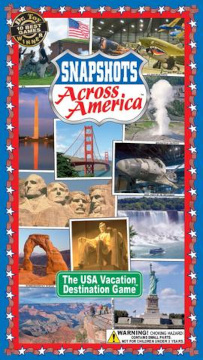 Snapshots Across America™ is a great game for learning about states, their locations, historical sites, and tourist attractions. More importantly to many, it’s fun to play. Snapshots Across America is recommended for ages eight and up, but six- and seven-year-olds might join in with some assistance. Up to six people can play at a time.

It consists of a gameboard, four types of cards, and pawns in the shape of cars. The goal is to be the first to collect seven tourist attraction cards. Many of the tourist attractions are historical sites, and these might give parents opportunities to throw in quick bits of historical information about the sites.

Other types of cards are transportation cards that offer much faster means of travel by plane, ocean cruise, or train. (Players who want to travel to Alaska or Hawaii must use a plane or an ocean cruise.) Bad weather cards can be played against an opponent to prevent them from acquiring a tourist attraction card, but many of these weather events are regional, and players have to pay attention to which cards can be used when. Travel alert cards can be used to cancel another player’s special transportation card.

Players keep six cards in their hands, drawing new cards only as needed. Their car can move through one state at a time (unless they have a transportation card) to travel to a state with the tourist attraction on one of their cards. Younger children might benefit from some coaching to figure out the shortest route to their destination.

You can modify play for a quicker game by setting a goal of only four or five tourist attraction cards rather than seven. You might also remove the bad weather cards or travel alert cards if they might be too upsetting for younger players.

Removing bad event cards makes the game simpler to play, but those cards also make the game more challenging and unpredictable—features that make the game fun even for adults. There are a few other tricky aspects to pay attention to. For instance, if you fly to Hawaii, you better make sure you already have either a round-trip ticket on your transportation card or another card with a return flight or an ocean cruise, or else you might sit out the game at your vacation spot.

The rules are explained on a brief, two-sided instructional page included with the game. I found a few items that were not addressed in the rules, such as how to handle the situation where you have two tourist attraction cards for one state. Can they be used in one turn or two? You’ll have to make up your own house rules in these instances.

Snapshots Across America is a relatively inexpensive game, so I expected it to be a fairly pedestrian game with some educational value. I was pleasantly surprised to find it fun to play (as well as having educational value). My grandchildren liked it so much we played four games the first day we tried it out.

Click on the image to go directly to Sonlight for current prices and options.

Sonlight has a Rewards Program I enjoy. If you decide to purchase from Sonlight, enter my Rewards ID CD20086130 when you register an account on their site, and you'll get $5 off your first order ($50 or more). I'll get points that I can redeem at another time. You can click on the image above to go directly to Sonlight's Rewards Program page where you can create your own Rewards account. (Using the link should automatically enter my referral code.)