America from the Beginning 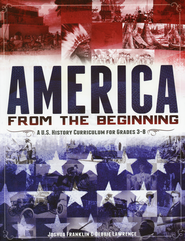 I expected to like America from the Beginning since Answers in Genesis has been publishing some high quality homeschool resources. When I read about the organization of this course, I was even more optimistic. The course was designed for use with grades three through eight, so you can combine your children for the study of U.S. History. Notebooking and hands-on activities are included in every week's lesson. The curriculum is written from a Christian perspective. Connections to what is happening around the world as well as in the realm of technology are included within every unit.

All of this sounds great but when I actually read the text, my enthusiasm was muted. It sometimes seems as if the various sections were written independently of one another, and no one thought to check for repetition of ideas. (This struck me especially in the third unit on the early colonies.) This might have been done to repeat information for a younger audience, but I found it annoying. Also, while the authors want to stress God's providence and sovereignty and to hold up Godly heroes for admiration, it sometimes highlights the positive without providing a fuller picture. For example, men like Andrew Carnegie and John D. Rockefeller are praised for their philanthropy while their predatory business practices are ignored. While I prefer more accurate characterization, the positive approach used in such instances might appeal to some parents.

Lesson questions ask information/comprehension questions. If you want to use the text with junior high students, you might want to challenge them at a higher level. I suggest adding your own discussion questions, assigning essay questions, or supplementing with a resource such as one of Take A Stand's American History books.

There is no index, a significant issue with a 352-page textbook, but the publisher is considering adding one to the next edition.

There are many more activities here than you will find in most history courses, and, even if you choose to skip some, you will likely find many that are interesting, practical, and/or useful. However, I was disappointed to find some activities uninspiring or vague. An example of the uninspiring is making homemade lemonade (p. 37—relates to lack of Vitamin C for those on long sea voyages). An example of what I consider a vague activity would be the instruction to build a model ship from whatever scraps of wood, craft sticks, or toothpicks you've got on hand and then test it to see if it floats (p.148—relates to ship building). However, there are no instructions as to how that might be done,

The course has students construct a notebook where they will keep map work and timeline sheets along with a third section for writing, drawing, crafts (or maybe pictures of crafts completed), and any other coursework they want to keep.

On a more positive note, I very much like the connections to world history and technology. Too often students study U.S. History as if our country were almost totally disconnected from the rest of the world. Frequent biographical sketches of key figures also make the text more engaging.

The course has eighteen units, and each unit should take two weeks to complete. Suggested schedules are given for either daily lessons or three-days-per-week. Students should be able to work through all but the activities on their own.

While the publisher recommends the course for students in grades three through eight, I think it most appropriately targets grades four through six. In my opinion, seventh and eighth graders should be using a text that presents things in a more nuanced fashion and that challenges students to think about issues beyond the informational level. On the other end, third graders might be overwhelmed by the amount of information.

There are three components to the course: the student text, the teacher supplement book, and a Reproducibles CD-ROM; the CD-ROM is included at the back of the teacher supplement book. The teacher supplement has a brief four-page introduction that primarily consists of annotated lists of recommended historical fiction and other books by time periods. There's no requirement that students do supplemental reading, but it would certainly be useful to add at least a few real books to the course. The teacher supplement lists activity supplies needed for each unit and the reproducibles to print from the CD, then it provides the answers to the lessons (in the text) and quizzes (on the CD). The CD has a two blackline maps (world and U.S.), some activity worksheets, timeline sheets, and two extra documents to read relating to World War II.

The student text features full color on many pages and at least three colors on others. Most images in the text are from the public domain. Many images for the nineteenth and twentieth centuries are old black-and-white photos while there are more full-color illustrations for very recent years as well as for earlier time periods.

Despite the few shortcomings I mentioned, this course might be very suitable for families who want a strongly Christian (Protestant) history program that reflects belief in a young earth and generally takes a politically conservative approach.

America From The Beginning Teacher Guide and CD-ROM