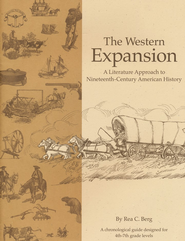 As do all of the other Beautiful Feet “Literature Approach” to history guides, The Western Expansion directs students through a study of history using real books. The historical period covered here is the 18th and 19th centuries in the United States, with the latter period receiving the most attention. The guide is appropriate for students in grades four through seven, although parents need to work more directly with fourth and fifth graders than with older students, including reading aloud books that older students can read on their own.

The selected literature follows a chronological progression although there is some overlap as you would expect. The required books are Frontier Living by Edwin Tunis, Abraham Lincoln's World by Genevieve Foster, Daniel Boone: The Opening of the Wilderness by John Mason Brown, The Year of the Horseless Carriage by Genevieve Foster, Of Courage Undaunted: Across the Continent with Lewis and Clark by James Daugherty, Amistad: The Slave Uprising Aboard the Spanish Schooner by Helen Kromer, The Boy Who Drew Birds: A Story of John James Audobon by Jacqueline Davies, The Stout-Hearted Seven: Orphaned on the Oregon Trail by Neta Lohnes Frazier, and Abraham Lincoln by James Daugherty. Those teaching younger students should probably omit Abraham Lincoln's World since there are so many books to get through and this one might be a bit beyond their “listening level.”

You can tell from the titles that the study is wide ranging. While students learn about important people of the time period, they also learn about life challenges faced by pioneers, world events that influenced the U.S., Native American tribes and their cultures, slavery, natural history, the Civil War, and much more.

A crucial element is student notebooking. Students read or listen to the literature, discuss what they have been reading (often with Socratic type questions), relate aloud what they have learned, then record in their notebooks. In addition to written narrations, student notebooks will include vocabulary words and their definitions. Parents might also have students do map work, essays, reports, copywork, drawings, and other activities in conjunction with this study, all of which can be included in the notebook.

The Western Expansion guide lays out lessons with reading assignments and discussion questions. An answer key with suggested responses at the back of the guide might save parents of older students from having to read everything their children read, but it will be much easier to have productive discussions if parents read all of the books themselves. Lessons often include web links and occasionally include extra “historical helps” boxes with helpful background information. Some movie/video recommendations are included.

The Western Expansion should follow Beautiful Feet's Early American History guide since it follows chronologically, but it can also be used by those who have used other resources to begin their study of American History.

Some families might want to broaden study of the westward expansion to include Beautiful Feet's California History through Literature study. A chart in The Western Expansion shows how to integrate these two studies chronologically. Most of the 51 lessons in The Western Expansion should take about one day each to complete, so there should be time to combine the two studies at least to some extent in one school year. If you complete about three or four lessons per week in The Western Expansion plus the occasional report, internet research, suggested movie, or other activity that requires additional time, you should still be able to complete this study in one semester.

Note that this study is religiously neutral both in the literature and discussion questions. The guide is available in a print edition or as a downloadable PDF file. Beautiful Feet sells a package that includes the guide and the required books at a discounted price.

Click on our affiliate links below to purchase directly from the publisher and help support this website.