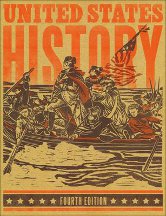 Suggested for eleventh grade, United States History is another outstanding text from BJU Press. It begins with the period of exploration and the Reformation and continues through the 2010 elections.

It covers United States history from a conservative viewpoint. The role of religion in history is prominent, and the perspective is strongly Protestant. (So much so that Catholics would not be comfortable using it.)

The text is now in its fourth edition. While much of the content remains the same, there have been significant rewrites throughout the book, a complete reformatting, and changes in the questions as I explain below.

Rather than simply presenting information, this text looks deeper into philosophies and ideas out of which arise the issues and events of history. Questions in the text as well as activities in the companion student activity book often push students beyond superficial answers. Student activity book assignments occasionally require research beyond what is included in the text.

One of the strongest features of this course is the excellent, thought-provoking questions. Section Quizzes throughout each chapter have comprehension questions, but Chapter Reviews have a variety of questions plus a list of "People, Places, and Things to Remember." While students should probably write out their own answers to the Section Quizzes, the Chapter Review questions might be assigned for written responses or discussion, or more likely a combination of both. Chapter Review questions in the third edition had only two categories: content and application questions. Questions are now presented under four headings: Making Connections, Developing History Skills, Thinking Critically, and Living as a Christian Citizen. Developing History Skills questions, for the most part, could easily be included under Thinking Critically.

Questions in the fourth edition often bring up "four core values" which are listed as freedom, individualism, equality, and growth. I don't see these mentioned in the goals of the course, but they seem to be a key theme. Living as a Christian Citizen might occasionally include questions about these and other values, but they often ask students to address particular issues from a biblical Christian viewpoint. Some questions in this area ask student to think about government and public policy from a Christian worldview. On page 167, one question reads: "From the biblical perspective on human nature, what dangers can be found in the Federalist emphasis on centralized government and in an Anti-Federalist push toward greater democracy?" They even include a question in Chapter 2 asking students to "respond to the argument that denying homosexuals the right to marry denies them fundamental liberties that heterosexuals possess" (p. 43). The textbook clearly takes some very strong positions even in the way it phrases questions.

The student text is a single large, softbound book with both black-and-white and full-color illustrations in an attractive layout. The print font is a little smaller than in the previous edition. While the text is certainly readable, it's not as easy on the eyes as was the last edition.

The teacher's edition comes in two, spiral-bound books, with reproductions of slightly reduced size student pages. The teacher's edition has very helpful background notes and information plus answers and suggested activities in the margins. It also includes a few specific activities for homeschool students that wouldn't be practical in a classroom such as a recipe for baking a "Wartime Cake" as well as alternative suggestions for implementing activities. A Teacher's Toolkit CD-ROM included at the back of the first volume of the teacher's edition has teaching helps that may or may not be useful to homeschoolers.

Even though all homeschoolers will not agree with the religious and political perspectives of this textbook, United States History is exemplary in its emphasis on critical thinking and analysis.

You might want to check out the premade lesson plans from Homeschool Planet that are available for the United States History. (These are found under the BJU Press History page at Homeschool Planet.) You can sign up for a 30-day FREE trial.