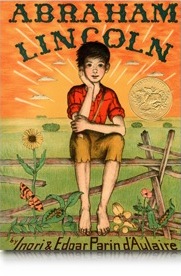 I rarely review historical biographies, but I’m making an exception for Abraham Lincoln by the d’Aulaires. Ingri and Edgar d’Aulaire wrote and illustrated a number of children’s books such as Leif the Lucky, d’Aulaires’ Book of Greek Myths, Columbus, Pocahontas, Benjamin Franklin, and Buffalo Bill. Although the originals were first published in the middle of the twentieth century, most of these books have continued to be reprinted by various publishers ever since—a testimony to their outstanding quality. Many of these books have won awards, however Abraham Lincoln won the third annual Caldecott Medal for the year’s most distinguished picture book written for children—a very high honor.

Abraham Lincoln was republished in 2015 by Beautiful Feet Books as a 75th Anniversary edition. The book is heavily illustrated with both black-and-white and full-color illustrations that are uniquely charming. The original book was printed in five colors using stone lithography, a process rarely used today. Beautiful Feet Books obtained permission to use the original 1939 lithographic prints so that their 75th Anniversary edition could be as beautiful as the original. While it looks very similar to the original, some minor editing and revisions were done by Rea Berg.

While the book is lovely to look at, the content is equally delightful. Abraham Lincoln is a perfect example of what Charlotte Mason would call a “living book.” The writing style is lively and engaging rather than simplified for children, yet young children will easily grasp the story.

The story stresses virtuous character traits. For example, although the bankruptcy of Lincoln’s store in New Salem could be attributed to his partner’s mismanagement and laziness, Lincoln accepted responsibility. The story tells us, “Abe’s father had taught him: ’If you make a bad bargain, hug it all the tighter.’ So instead of running away Abe stayed and toiled to pay back all the debts.”

This is a historical biography that teaches children a great deal of history while fleshing out characters with constructed dialogue and action. The d’Aulaires’ story covers the life of Lincoln from his birth through the end of the Civil War, concluding before his assassination. It is entirely suitable for young children, but older children are likely to enjoy it just as much.