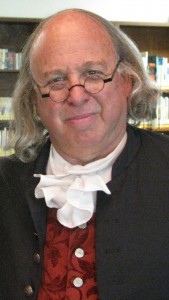 I have encountered a number of actors who portray famous historical figures. Generally, they make public appearances and do school group presentations. The cost for these personal appearances is generally beyond that of most homeschool groups outside the large conferences. However, historian and actor Christopher Lowell uses modern technology to bring Benjamin Franklin to life via DVD presentations. And for those with a co-op or group class, you can combine watching the DVD with a visual, twenty-minute Skype “visit” with Benjamin Franklin (Christopher Lowell) as he talks with your group and answers questions just as he does when he makes appearances in person. This option should be very affordable for homeschool groups.

Having met “Benjamin Franklin” in person in addition to reviewing the DVDs, I can attest to the excellence of Christopher Lowell’s presentation. You can view snippets from his performances on his website and see for yourself.

“Tell Me, Ben Franklin…” is a 20-minute DVD presentation of Christopher Lowell in full costume and setting as Benjamin Franklin. He explains many of the highlights of his accomplishments in science, politics, and civic life as well as his personal life. He also encourages children to read, learn, and help others. The presentation is from a humanist perspective promoting positive values.

Three different versions of this presentation are available: “Tell Me Ben Franklin 1: Becoming a Nation” is for grade levels three through five; “Tell Me Ben Franklin 2: Out of Many, One” is recommended for grades six through eight; and “Tell Me Ben Franklin 3: A Republic, if you can keep it” if for high school level. Many of the same ideas are presented on all three DVDs but at slightly different levels. If you want to choose one for the entire family, I suggest getting the one for high school level. Ancillary material with discussion questions is available with each DVD upon request at no extra charge.

After getting acquainted with Ben Franklin, students can watch any or all of the five- to ten-minute presentations on specific topics on the DVD “Ben Franklin Speaks...” Lowell, as Ben Franklin, addresses 14 topics such as “On Family,” “On Seeking Virtue,” “On His Diplomacy in France,” and “On Slavery.” On this DVD, Franklin explains more of his ideas and thoughts, his personal history, and key historical events in which he played a role. Parents might want to preview and choose which of these to view in advance since they can be used in any order you please.

Two additional DVD presentations are available, although these are presentations recorded before adult audiences: "Ben Franklin Live" and "Ben Franklin's Tea Party." Both run well over an hour. You might use these with mature teens, but parents should preview them in advance and determine whether or not they are suitable. "Ben Franklin's Tea Party" is a very interesting "grilling" of Ben Franklin by four panelists who raise very challenging questions on touchy issues. Panelists represent both liberal and conservative viewpoints, while one British panelist accuses Franklin of treason for having embraced the cause of American Independence. Panelists often ask leading questions, trying to coerce Franklin into supporting their own viewpoints. "Ben Franklin Live" is a monologue presentation filmed before a live audience in Washington state, followed with a question and answer session. The content is much less controversial than "Ben Franklin's Tea Party," and you might want to have older children and teens watch this DVD. The question and answer sessions on both of these DVDs demonstrate Christopher Lowell's depth of familiarity with Benjamin Franklin as well as the entire historical period. At the end of "Ben Franklin Live," Lowell removes his wig, introduces himself, and takes personal questions as well as further questions about Franklin that you won't want to miss.

Lowell strives for historical accuracy in his portrayal of Franklin. For example, when discussing the Boston Tea Party, he explains the genesis of the event and what actually happened, as well as Franklin's personal opposition since the cost of the destroyed tea would be borne by the East India Company rather than the British government. Similarly, he reveals Franklin's common law marriage, explaining why this was not unusual for the times and circumstances. He presents Franklin's views and actions as they were rather than try to refashion them to suit his audience.

If you are going to visit with Benjamin Franklin via Skype, you would do so after watching at least “Tell Me, Ben Franklin…” so that children know something of his history and can come up with pertinent questions to ask.

Watching the DVDs will certainly help bring history to life, and it’s even better if you can pull together a group to host “Ben Franklin” via Skype.