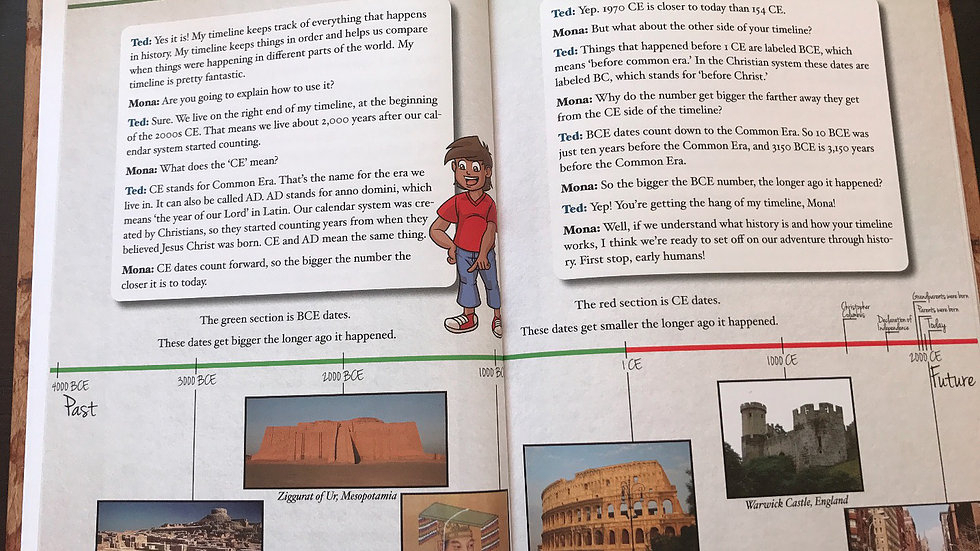 Curiosity Chronicles: Snapshots of Ancient History is the first of a planned series of history books for students in the elementary grades written from a secular perspective. Snapshots of Ancient History is like other popular histories such as Story of the World and A Child’s History of the World in that it takes a story approach. Author Rachel Meyers selectively chooses stories of key people and events to introduce young students to world history rather than trying to provide comprehensive coverage.

This book’s subtitle, Globally Minded History for the Elementary Child, alerts us to the fact that this book chooses stories from around the globe. Stories jump back and forth from continent to continent following a somewhat chronological thread. For example, the fourth story is about the uniting of the two kingdoms of Egypt, but Egypt is revisited later with stories about religious beliefs, mummies, and pyramids. Similarly, we visit India for a story about the start of civilization in the Indus Valley and later revisit India for stories about the Vedic Period and Hinduism, the beginning of Buddhism, and the Gupta Empire. Stories in this book begin with cave men and conclude with the fall of Rome. The next book in the series, Snapshots of Medieval History, will cover from 500 to 1550 CE.

While this is clearly a secular approach to history, many stories discuss religious beliefs, often in depth. No opinions are presented regarding any of them.

Each story is presented as a dialog between two characters, Mystery Mulling Mona and Time Talking Ted. Cartoon drawings of the two characters are scattered through the text along with plenty of full-color illustrations, maps, and photos.

There are 36 stories in this 213-page book, with a typical story running only about six pages. Most stories can be read in one or two sittings. There are no workbooks or ancillary products but there are “Want to Know More?” topics listed at the end of each story that can be used for further research or reading.

A great deal of information is conveyed within each story, so I would not recommend that you use this book with first and second graders. They are unlikely to have enough context to take in all of the information. I think third through fifth grade students are likely the most appropriate audience, but older students might enjoy reading these stories as well.

I wouldn’t be surprised if the author eventually develops an activity book of some sort to use with this book to make it into a more comprehensive course, just as Susan Wise Bauer has done with Story of the World.