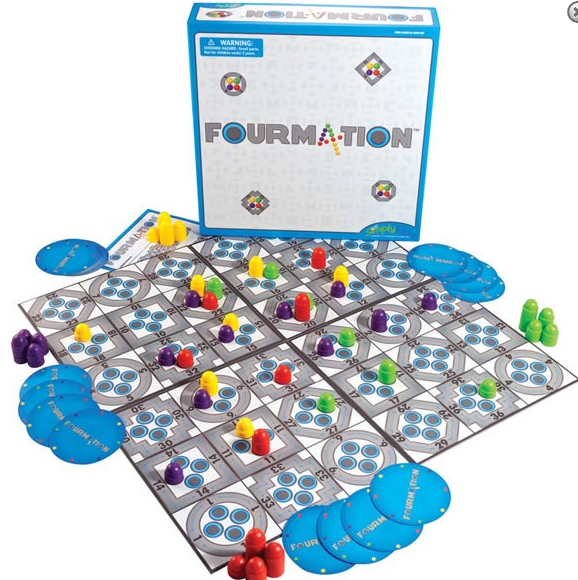 Fourmation is a math and strategy game that I would recommend for ages seven and up. While the publisher recommends it for ages eight and above, younger children who have mastered the addition facts and can think strategically can play as well. Two to four people may play at a time. The math involves only addition, however, the strategic elements of the game will appeal even to adults.

The board is constructed in four separate quadrants than can be put together in any configuration for each game. So play will almost certainly be unique each time. Each quadrant has nine zones, so the complete board has six zones in each direction. The goal of the game is to control four zones in a row—horizontally, vertically, or diagonally. Think of it as a much more complex version of Tic-Tac-Toe.

The deck of round cards has one number (1 through 19) on each card. Players always hold four number cards in their hands. On each turn they use one or more of their cards to add up to the number on a zone. They can then put one of their colored playing pieces on that zone. But then other players can also put their playing pieces in the same zone. You can only control a zone by having the only playing piece in the zone or having one more playing piece than any other players in that zone. But your control is only temporary until you have a stack of three pieces in the zone. So on each turn it is a challenge to decide whether to play offensively—staking out or strengthening a claim to a zone so that you can link four zones—or to play defensively by trying to block another player. Players have to continually work with their cards to try to come up with sums that equal that of desirable zones.

Although it is not mentioned in the directions, you might simplify the strategy and speed up the game with young players by not allowing more than one player to place their marker in any one zone.

Fourmation is much more fun than speed drills for developing rapid fluency with the addition math facts, and the strategy elements make it fun to play even if improving math skills isn't your goal.