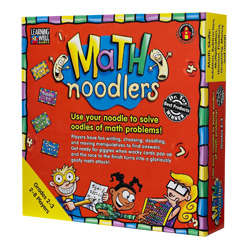 Math Noodlers games are somewhat like the very popular Cranium® games with categories of questions that involve multi-sensory responses. Math Noodlers are more educational since they narrowly target knowledge and skills for certain grade levels. There are two Math Noodlers games with one for children in second and third grades and another for those in grades four and five. They will be most useful for those who have children no more than one or two grade levels apart, but, as I’ll explain later, older children can still play.

Each game comes in a square box with a fold-out, full-size game board. There are four stacks of cards with 48 cards for each category. Also included are 36 Noodle-O’s, small plastic rings in six different colors that are used as counters and for creating shapes.

All questions relate to math, but they cover all different strands within math including the basic functions, time telling, money, skip-counting, geometry, mathematical reasoning, fractions, measurement, estimation, calendar, temperature, and algebraic concepts. There are just a few cards that direct students to use a calculator, so you need to have a calculator on hand.

I received the game for second and third graders for review. A few questions seemed like they might be beyond even some third graders. For example, one question says, “Mia Mouse is 6 inches tall. Kitty Cat is 2 feet tall. Using Noodle-O’s, show how many Mias it would take to equal Kitty.” This requires unit conversion then division. Students might be able to solve it visually with the Noodle-O’s if they understand that six inches is half a foot, but the problem is a bit complex for second graders. Also, both multiplication and division show up in some problems in the lower level game. Even so, having a few “super-difficult” problems adds more of a chance element to the game that wouldn’t exist if all questions were easily answerable.

The four categories of cards are Choose it! with multiple-choice questions, Show it! where students show their answers with Noodle O’s, Write it! where students write answers on scratch paper, and Doodle it! where players draw their answer—which might be a picture, shape, array, or some other drawn response. You might need to put a time limit on drawings to keep players from becoming too detailed and elaborate. All categories include some "Wacky" questions that generally require the player to do something silly as they answer the question.

All of these categories are heavily weighted with word problems; very few problems are presented only as arithmetical problems. Answers are on a separate answer sheet rather than on the cards themselves, so someone needs to serve as "keeper of the key"—probably a parent or older sibling rather than one of the players.

Some questions are challenging not just because of the math. One of the "Wacky" cards in the “Write it!” category tells the player to, “Balance a pencil on your head while adding: 1 + 2 + 3 + 4 + 5 + 6 = ___.” Balancing the pencil might be much more difficult than adding these numbers together. The distraction of worrying about the pencil might make it impossible for some children to use their scratch paper and pencil to get this one correct. Because these sorts of questions are included, children beyond the designated grade levels can also play since elements other than the grade-level math provide some of the challenge. If you are not sure which level to purchase, I suggest purchasing below level rather than above.

Players roll a die and move around the board. They draw cards from categories that match the color of the squares on the game board—they don’t get to select their favorite category. If they answer correctly, they get a free bonus roll but not another question. The game board’s path has only 21 squares, so the game might be played relatively quickly, especially if a player rolls high numbers and answers questions correctly.

The Math Noodlers games’ colorful design and cartoon illustrations make the games look like fun. The multi-sensory forms of the responses address the idea of multiple intelligences—that children have strengths in different ways of learning—so that all children have an opportunity to be successful. While these elements make the games fun to play, the math is definitely challenging enough to put these games solidly in the educational realm rather than the entertainment realm.