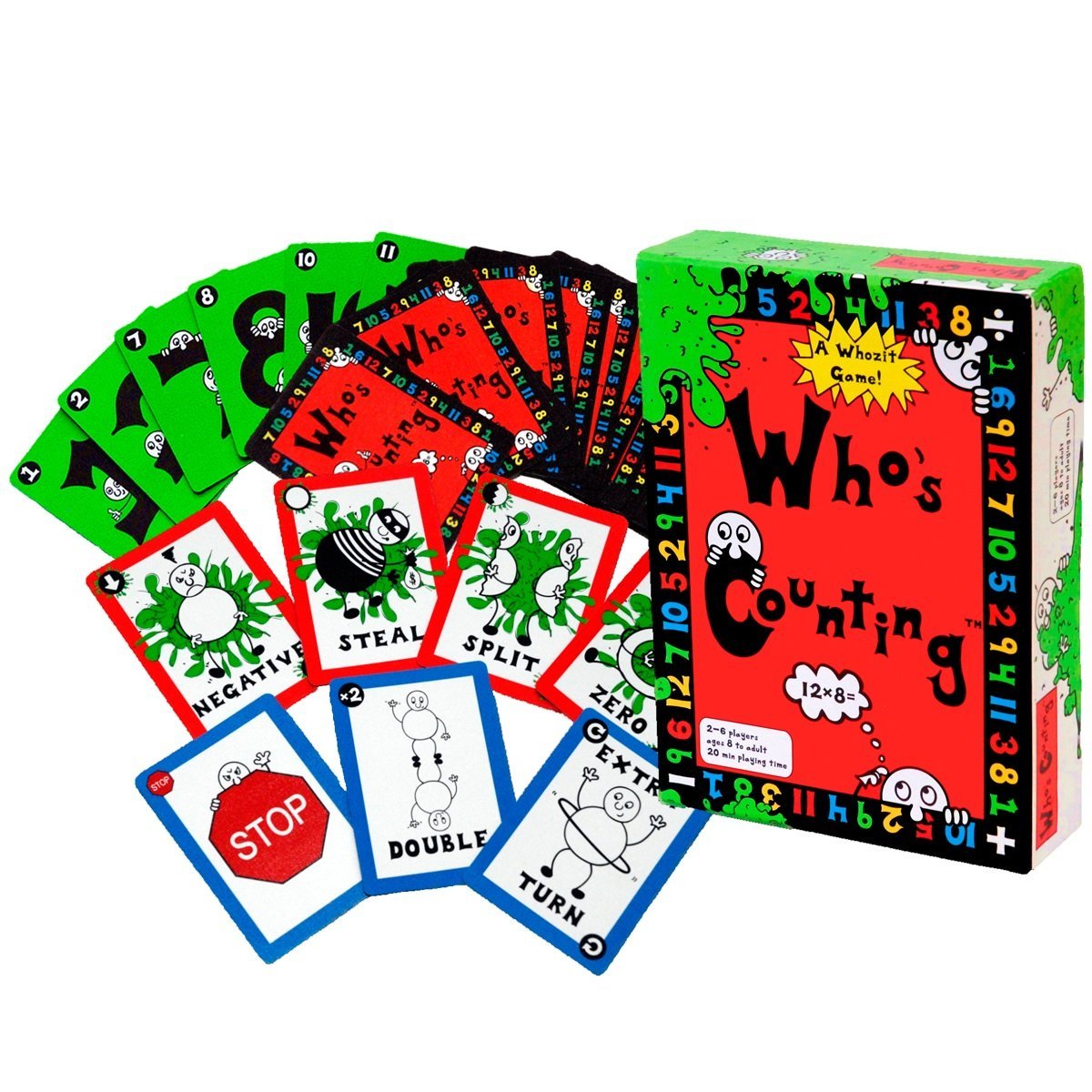 Who’s Counting™ is a math practice card game in which players create equations from playing cards with numbers 1 through 12 and operator cards for addition, subtraction, multiplication, and division. But there’s more to it that sets it apart from other math card games that involve creating equations.

Who’s Counting is the most well developed equation card game I’ve yet seen. The packaging is very classy. The cards, instructions, and a score pad come in a very sturdy, colorful box. The cards have full color on their backs while their faces are printed with from one to three colors. Cartoon drawings illustrate the blue and red “special cards.”

As in other equation games, players use cards in their hand to create equations, and those equations can include up to three operation cards and two to four number cards. Players try to produce the highest number with their equation rather than targeting a certain number. That number is the base of their score. They also get bonus points for the number of operations included. It's up to you whether or not to require players to follow the normal order of operations (multiply or divide then add or subtract) since there are no parentheses. Just make sure the order of operations rules are clear before you begin. Either way, players should explain the calculations for their equation to demonstrate how they arrived at their answer. You might have a calculator on hand to quickly check work, but you might want to require that even the checking be done mentally or with pencil and paper.

To make the game more interesting there are blue and red special cards—four types of each. Red cards are played on an opponent’s turn. A “Negative” card turns the opponent’s equation total into a negative amount. “Steal” cards give the player’s points to the player with the lowest score. “Split” cards split the player’s score with the person playing the card. “Zero” cards cancel out points that would have been earned on that turn.

Blue cards are played on the player’s own turn. “Stop” cards counteract any red card played against the player’s equation on that turn. “Double” cards double the points. A “Choice” card may serve as a number or an operator to help a player create a better equation. “Extra turn” cards gain the player an extra turn. In addition to the blue and red cards, “Super” cards act as wild cards. Then to make it even more interesting, four of the red cards have a Green Goo symbol, and these cards cannot be stopped by one of the blue “Stop” cards.

As you can see, students have to do a good deal of mental math to work on creating equations with the highest value—great math fact drill in disguise. The extra cards introduce elements of chance while also training players to think about strategic use of their cards.

From two to six people can play at one time and players should probably be about third grade and up. While elements of chance help to level the playing field, you might consider having an older player pair up with a younger one to create a fair game among your own family members.

While I love some of the computerized math drill games for mastering math facts, I really like interactive games like this that require much more mental math fact manipulation and thinking skills.