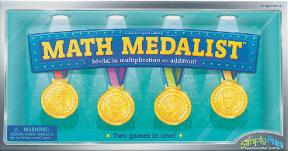 Math Medalist™ has two complete games in one box. The full-size, double-sided game board is used for “Multiplication Zones” on one side and “Field of Hundreds” on the reverse. These games are designed to be played in about 30 minutes. Players should be about ages eight and up.

These games are fun to play, even for adults. I think Multiplication Zones should be especially effective for helping students master multiplication facts without realizing that’s what’s happening.

As is true of all of the SimplyFun games that I have reviewed, the games are very high quality with heavy-duty components that look great and should last through lots of use.

On the Multiplication Zones board, numbers from one to ten are laid out in a grid with their multiples, both horizontally and vertically. For example, the rows for the number three have the numbers 3, 6, 9, 12, 15, 18, 21, 24, 27, and 30—both horizontally and vertically. (While this is a multiplication game, it is also great for learning factors.) 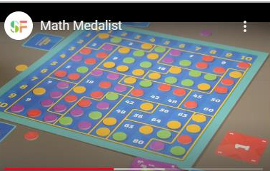 The numbers on the board are sectioned with bold lines into groups of numbers to form the zones. The goal is to control the most zones by putting your colored markers on more of the numbers in each zone than your opponent(s).

Cards in the game’s card deck have numbers from one to ten. Players have five cards in their hand to start. The dealer turns over the top card on the remaining deck. Players choose one of their five cards to multiply by the card on the top of the deck. Here’s where the strategy gets tricky. Players need to choose a number in a zone on which to put one of their markers that works to their benefit in controlling zones. They have to do a lot of mental math to identify the best option each time.

You can make the game more competitive by having players each choose the number card they will play and lay it face down in front of them before anyone plays. Since players commit in advance to a certain card, inevitably someone else will sometimes have chosen the same number card and will cover the space another player intended to claim. If subsequent players are left with no open numbers to claim, they lose a marker.

The instructions provide an alternative method of play to make the game easier. Each player chooses their card and places their marker before other players have to commit to a particular card. This lets them change their choice if their first choice has been pre-empted.

The strategic aspects of this game make it lots of fun to play. Players can “battle” over particular zones if they want to by focusing on acquiring certain numbers just to stop an opponent from controlling a zone. A player with weaker math skills can still win by playing strategically and being blessed by the luck of the draw.

Field of Hundreds requires addition skills along with strategic thinking. Players add numbers up to one hundred and beyond, but all numbers are multiples of ten, so the math isn’t difficult. The strategic thinking—the need to weigh multiple possibilities to gain the most points—is what raises the level of difficulty beyond the capabilities of most first and second graders. 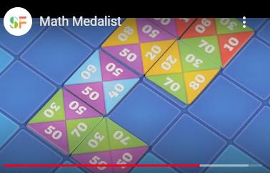 Players draw two tiles at a time from a bag of “Addition Tiles.” A random tile is drawn to use as the starting point in the center. Each tile is divided by diagonal lines into four quadrants. Each tile can have only one or two of five possible colors for its quadrants. Each quadrant has a number from 10 to 90.

On each turn, the player has to match a tile by color to the quadrant on a tile already on the board. But in addition to matching by color, the sum of the numbers in both touching quadrants must be 100. Students score only the points from the quadrant on the tile they add to the board. If there are tiles already placed to either side of where a player wants to put their tile, the new tile being placed must match in color to adjacent quadrants on those tiles as well. If the total where these other quadrants match up is 100, the player can score additional points, but they receive no points if the total isn't 100. You will end up with some dead spaces where no tile can be placed because of the color-matching requirement.

Players move their wooden, people-shaped pawns around a track on the outside edge of the board to count up their points. The track goes up to 800 points, and players can earn lap tiles to keep track of points if they are able to start around the track a second or third time.

Medallions with images of famous mathematicians (printed on chipboard) are to be rewarded to players. I realize that the medallions reflect the title of the game, but we didn’t care about using them.