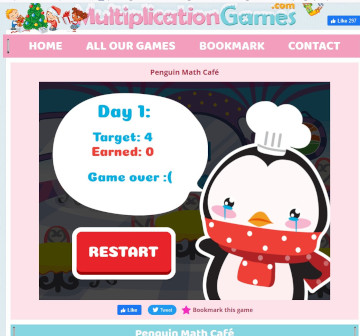 MultiplicationGames.com is a free website with more than 30 multiplication games that can be played on most devices. No signup is required. The website says that there might be ads appearing with some games, but when I tried a number of them, I didn't encounter any.

The games offer lots of different designs and strategies. All of them include sound effects, and all except a few include animations. Most of the games are short, so students might play one over and over again or try a variety of games.

Some of the games are very straightforward. For instance, Multiply Fast presents problems in a timed format. If players don't select the correct answer quickly enough, they have to start over. (This one can be frustrating!)

There are other games that offer "gentler" types of timed practice than in Multiply Fast—games such as Penguin Math Cafe. Penguin Math Cafe is also a little more complex. It lets you select one or more times tables as the source of the problems to be presented. Then problems pop up one at a time. A bar on the right is actually a timer, but it's not obtrusive enough to distract students until the last few seconds when it starts a soft beeping sound. Students earn points for problems answered correctly no matter how long it takes. They can earn higher scores by working more quickly.

Some games, such as Caveman Multiplication and Multiplication Mouse add gaming elements. In these two games, players have to select correct answers to multiplication problems that appear on the path while also dodging enemies and obstacles. Snowman Multiplication allows players to select the times tables involved in each game. it requires players to simply move the snowman so that he catches the correct answer with his carrot nose. However, the game gradually speeds up. If players can catch the falling snail, the game's snowfall slows down. If players catch the falling star, they get an extra life.

Many of the games have instructions on the opening screen which I found very helpful, but they don't explain everything. Math vs Bat has bats attacking a castle. Players need to answer multiplication problems before each bat crosses a white line. The appropriate background music (creepy but playful) keeps this from being boring. However, after solving 100 problems correctly, my game still didn't end. Maybe it continues until the bats overrun the castle or the player simply quits, as I did.

Many of the games are from GamingBee.com (a site that no longer seems functional),  and some of the race-type games are from Arcademics.com, one of my favorite websites for drill games. Some Arcademics® games offer players the option of playing against the computer or against other players.

In addition to the games, there are simple times-table practice problems. You can select any times table for numbers 1 through 12 for untimed practice.

I appreciate that MultiplicationGames.com focuses only on multiplication since that is probably the area of math where students most benefit from these types of games.