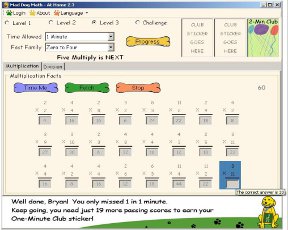 Since mastering math facts is critical for success in math, drill programs can be very useful. Mad Dog Math offers your choice of print or computer-based versions of their drill program. Choose one of four levels: kindergarten/first grade, second grade, third grade & up, or challenge. Level 1 and 2 are for addition and subtraction facts to the 18s family. Level 3 is multiplication and division facts to the 12s family. This level can be used with middle or high schoolers who have missed the facts foundation. The Challenge Level is for those students who want to keep sharp on their skills.

Students spend about ten minutes per day practicing the drills. If they pass today, they move to the next tomorrow. If they don’t then they practice the same set of facts for tomorrow. Thus, it is a true mastery program and not just “practice”. The program encourages students to try to keep passing to the next drill or enter the next “Club”.

The print versions come in binders with instructions, progress charts, drill sheets and answer keys. Drill sheets progress through increasingly challenging math facts from the first drill sheet to the last. For example, the first sheet in the first grade level practices adding only the number “0” through “3” while the last practices subtraction with numbers up to “18.” Kindergarten level has only 12 problems per drill while first and second grade have 20 per drill and the top level has 24 per drill. There are two sets of drill sheets for each set of facts, and the facts are randomly presented. Students progress through all the drills in a level in 2 minutes (2 Minute Club), then back through the same drills in 1 minute (1Minute Club), and then a final time through all drills in 30 seconds (30 Second Club). By the third time through, they should really KNOW their facts.

Drill sheets in the binder should be placed in vinyl sheet protectors. Then students can use a wipe-off marker to show their answers while everything remains reusable. You also have permission to copy sheets for children in your family and might choose to do that instead. Answer keys are the same pages reproduced but with answers included. Students might self-check if they are trustworthy. Since there are “A” drills and “B” drills covering the same fact families, students do form “A” one day and form “B” the next. That way, if he gets “stuck” on a particular drill for 2 or 3 days or longer, then he won’t be doing the same one every day and memorizing the answers to the rows rather than answering the problems.

While Mad Dog Math sells a timer, it’s not included with the binder since many people already have one. Some might also be interested in Mad Dog Math Flash Cards that correlate with the top three levels of the program as presented in the binders. This offers yet another way to drill students on the same sets of math facts. Flash Cards are punched and come with a ring so that you can select particular math fact families for your student to practice and keep those cards together.

The binder programs are also available on CD-ROM so that you can simply print out pages as needed. Prices for binders or CD-ROMs can be found on the publisher’s website.

The computer-based version is a download for Windows PC systems that contains all levels and can be used to track multiple students. You can select a one-year license for $19.99, a two-year license for $29.99, or a perpetual license for $39.99. There are four levels, but they begin with 20 problems per screen for the first two levels. (Kindergarten is included in the Level 1 program.)These two levels both cover addition and subtraction facts to the 18s family. The difference between Level 1 and Level 2 is that Level 2 introduces missing addends. The third level moves on to multiplication and division, and the challenge (fourth) level mixes all four operations. The third and fourth levels have 24 problems per drill.

You can set the time limit on the computer-based drills for 2 minutes, 1 minute, 30 seconds, or no limit . Students can miss no more than 2 problems per drill within the time limit to pass on to the next drill page. They earn “stickers’ as they progress. The program automatically presents the next drill when they pass each one. Students receive immediate feedback, and parents can access data on student progress any time they wish.

I think the computer-based program is the best way to go both because it allows students to work independently and because the cost is so reasonable.