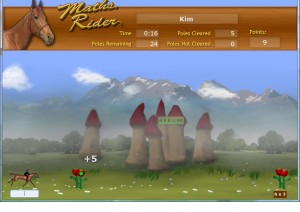 Children about ages 6 to 12 can drill math facts through Math Rider, an online “quest” game. Created by an Australian company, the game sends “riders” on quests to help free a captured princess. Elements of fantasy are included such as elves and wizards. These show up both in the story that introduces each quest and as characters along the way rather than performers of wizardry. Animated quest scenes flow behind riders and math problems as riders progress. The graphics along with the quest scenarios make Math Rider more visually interesting than most other math drill programs I have seen. The storylines are fairly simple, but these are being upgraded even as I write this review so that there will be more variation and stronger connection to the rewards.

Math Rider drills on addition, subtraction, multiplication, and division. There are optional practice drills for students to try before setting out on a quest. In practice drills, students may choose for these to be timed or not, and they can select the number of problems.

Each math operation has four levels of quests ranging from easy to mastery levels. The program adapts to the student’s ability, generating problems that the student needs to work on rather than simply answering a preselected set of problems.

Students answer by keying in the numerical answer and hitting enter. There are no additional keyboarding skills distracting from the drill or complicating student responses. They gain points for correctly-answered problems as wells as for the speed with which they answer. It will take a number of rides before a student can reach the goal of each quest. Animated “rewards” and story elements are attained at the end of each quest ride.

The Australian voiceovers are a pleasant novelty for American users, and the accents are not strong enough to prevent understanding.

The program downloads to your computer and requires an internet connection to register it. After installation, the program is resident on your computer and requires no internet connection other than to receive free updates. A dial-up connection is sufficient for downloading. Up to eight players may be entered into a single license, and that license does not expire. There’s a free 7-day trial as well as a 30-day risk-free guarantee.