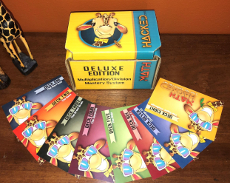 MathHacked is a system for mastering multiplication facts that uses mental associations and patterns for different groups of math facts. Even though it teaches multiplication (and division if you add the bonus modules), MathHacked creator Heater Linchenko says that it can be used with children who can recognize numbers and understand which numbers are greater than or less than others, which would mean before they’ve learned addition and subtraction. That might well be possible, but I think it is probably best for students who have already grasped the concept of addition and know at least some addition facts.

The basic system consists of eight decks of sturdy cards (198 cards, 3.5” x 5.5” in size) and access to ten online training modules with brief videos that you watch as you move from step to step through the system. You can also participate in a dedicated Facebook group if you wish. The deluxe system adds three bonus modules on division, a sturdy storage box with divider tabs, and some extra cards with quotes and mnemonic illustrations. I recommend the deluxe system since it makes the transition into division very natural once students have mastered multiplication facts.

You need to work one-on-one with a student, although you can probably work with a few students together. Linchenko models working with one student in demonstrations for the decks.

To begin, in Step Zero, you will use a PDF slideshow (best shown on a computer, tablet or phone screen) to guide you and a student through the first step. Students first learn to look at two numbers joined by a multiplication sign and state—saying the name of the smaller number first—“four nines are” or “two sixes are,” etc.  They will not state the answer to the equation at this step. A demonstration video shows what this looks like as you use it with a child.

After Step Zero, you start using the card decks. The first deck consists of 12 cards with numbers 1 through 12. The last three cards are set aside at first as students learn the “married” math facts, which are all of the number pairs using 1 through 9 that equal 10. Next students work on learning doubles for each of the numbers, then halves for the even numbers. You can see how they are learning addition facts at this stage if they have not already done so.

Deck Two has cards with the math facts that Linchenko says are the easiest facts to memorize, i.e., facts with 0, 1, 10, or 11 as the multiplier. The deck teaches simple tricks for figuring out the answers to all of these without actually understanding the math. So children learn facts such as 9 x 11 = 99 as well as the fact that 0 x 3 and 0 x 5,279 are both equal to 0.

Deck Three teaches 3 x 3 = 9 up through 9 x 9 = 81. It does this by teaching students tricks they can use to arrive at the answer rather than developing conceptual understanding. For example, for the nine times table, they learn that the answer will be one less than the multiplier (the number other than 9) for the tens place, and the number to which it is married (see Deck One) will be in the ones place. So for 3 x 9, they will say that 2 is one less than 3, so the answer will be twenty-something. Then they will say that 3 is married to 7, so the answer will be 27. You need not use place value language unless they already know it.

Deck Four teaches the twelve times table by teaching the fact cards in special groupings. The facts 2 x 12 through 4 x 12 are taught together with one strategy. The next fact, 5 x 12, seems to be an easy one to memorize so there’s no special trick, and the next four facts are taught with yet another strategy.

Deck Five reviews the nine times table, the twelve times table, and the doubles to give students time to integrate and solidify what they have learned from the first four decks.

Deck Seven also breaks a small deck of ten cards into groups that are learned with different strategies. These math facts, e.g. 3 x 8, 6 x 7, and 8x 7, are the ones that seem most difficult for students to recall. Most of these facts are taught as bugaboos, and individual mental associations are presented that should help students remember them.

Deck Eight, the largest deck, covers all of the math facts students have learned, integrating all of the facts and their strategies. Decks are color-coded and kept separate, even when math facts are duplicated in another deck. So the eighth deck repeats math facts from other decks.

Demonstration videos show Linchenko working with children who probably range from about five to ten years old. However, I can envision students in junior or senior high who still struggle with math facts watching the videos and working through the system on their own. The tricks are useful no matter what age you learn them.

While the system is labeled for both multiplication and division, strategies are presented only for multiplication in the basic system. For division facts, you need to add the three Bonus Modules that extend lessons into division and work with larger numbers.

The Bonus Modules use digital decks of cards online to solidify multiplication skills and then transfer that knowledge to master division facts.

Two online decks for the first bonus module, The Quantum, present individual multiplication facts, sometimes reversing the order of multiplier and multiplicand from the way they were presented in the first eight decks. Both of these 91-card decks have the same math facts, but they simply present cards in a different order. The order of presentation for the digital cards in each deck remains the same every time. There are printable answer keys for both decks.

The second bonus deck, The IOB, introduces division by presenting division facts as multiplication turned "Inside-out-and-backwards." Children rely on their multiplication tables rather than learning division as a new set of facts. There are two digital decks of cards (104 cards each) with their answer keys for this module as with the first bonus module. Sometimes larger numbers are introduced in the equations (e.g., 200 ÷ 20) to challenge students to apply what they already know while stretching their thinking.

The third bonus deck, The Mind Bender,  introduces a mixture of larger and smaller numbers with two digital decks of 75 cards each. Multiplication and division facts are intermixed, so students need to pay close attention. While easy facts such as 8 x 4 are included, more challenging facts such as 8400 ÷ 7 require them to apply their knowledge that 7 x 12 = 84 in this new context then add zeros to their answer.

Some suggestions for further application and ways to make learning more concrete are included after the last of the bonus modules.

A major part of the strategy of MathHacked is to make this fun and playful, never discouraging. Let children try to figure out answers on their own if they are capable of doing so, give them hints, or just tell them the answers, especially at first. Gradually, you expect them to be able to answer without help. If you follow the strategies for recalling math facts as well as the suggestions for interacting with students, students are likely to have a positive attitude toward mastering math facts.