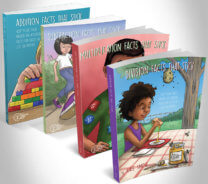 Parents or teachers interact with students throughout the lessons. Visual and physical aids are used to help students visualize math facts and develop mental math skills. Games give students lots of practice to learn the facts and develop mental math skills. And students will complete a page or two of practice problems each day. (Most students should write their answers for the practice problems, but oral responses might work better for some children.) For multiplication and division, the recitation of math facts is added.

Practice pages and their answer keys are at the back of each book. Some of the work on practice pages is cumulative, so students continually review what they have learned.

Before the practice pages, each book has a Game Boards section with visual aids, cards, and game boards that you will need to use. You might want to copy or print these onto cardstock since many of these items are used frequently. (You are allowed to photocopy or print practice pages, visual aids, and game components for your own family members.) While the four books are available as either printed books or PDFs, I think the PDFs are likely to be the most practical because you will likely be printing many of the pages.

This combination of direct teaching, visual aids, traditional-looking practice pages (with arrays of problems to solve), and the frequent use of games offers comprehensive strategies to help students master and retain their math facts.

Addition Facts That Stick should take six weeks to complete. Subitizing is the primary technique that students are taught so that they can learn to visualize small numbers quickly and think in terms of adding to five or adding to ten. Subitizing is taught using a visual aid called a "ten frame" (a strip showing ten connected squares with a bold line marking the fifth division) that is included in the Game Boards section. The Game Boards section also has ten-frame cards that visually illustrate numbers one through nine, plus game boards for Climb to the Top, Adding Eights, and Adding Nines Bingo. You will need to supply 15 small counters, a coin, game tokens, two decks of playing cards, a pencil, and paper. The card decks are used with some of the game boards, as well as for the games Tens Go Fish and Addition War.

Subtraction Facts That Stick is for use with children who understand the concept of subtraction but who cannot answer problems automatically. It should take about eight weeks to complete.

The book groups instruction around strategies rather than teaching math facts in numerical order. Just as in the addition book, the ten frame is used to help students quickly visualize number relationships.

In addition to the book, you will need 20 small counters, a coin, two game tokens, one deck of playing cards, one die, paper, and a pencil. Toward the back of the book, the Game Boards section includes a page with a two "ten frames," ten-frame cards for numbers one through 18, cards with each numeral from 11 to 18, plus game boards for Tic-Tac-Toe, Climb to the Top, Subtracting Nines, Subtracting Eights Bingo, Roll and Cover, and Subtraction Crash. The card deck is used with most of the game boards, and it is also used to play Neighbor Number Memory. The games are a little more complex than those in the addition book since the audience is likely to be slightly older. The game boards are followed by 32 reproducible practice pages and their answer keys.

As with the other books, children learn through direct instruction, games, and written practice, but they also practice multiplication by recitation. You will need to supply 20 small counters, a deck of playing cards, two dice, paper, and a pencil.

The primary visual aid used to teach multiplication is a ten-by-ten dot array with an L-shaped cover that you slide over the array to show different sized arrays such as five rows with eight per row. Children will first recite a times table as they simultaneously move the L-shaped cover over the array. Gradually they start to recite from memory in a traditional fashion. The ten frame is also used in many lessons.

The game board section of this book has the ten-by-ten dot array, the L-shaped cover, and game boards for Multiplication Race/ Bump, Four in a Row, Roll and Cover, and Over Under. There are a number of versions for each game, with each version designed for practicing a single times table (such as the multiples of six). The card deck is used along with some of the game boards and for the card game, Multiplication War. Students will play more than one of these games each week. The variety of games uses different mental pathways to reinforce memory retention while also making practice more interesting for students.

This book includes a ten-by-ten dot array and L-shaped cover like those used for multiplication. You will also need 25 small counters, a deck of playing cards, a die, two game tokens, a coin, a paper clip, a pencil, and paper.

The game boards are for Three in a Row, Race to the Top, Treasure Hunt, Connect the Boxes, Spin to Win, Finish Line, Division Bump, Climb and Slide, Four in a Row, and Review Bingo. As in the multiplication book, there are multiple versions of some game boards to use for practicing each set of facts (such as the quotients for numbers divided by eight). Some of these games are really ingenious! For instance, Climb and Slide reminds me of Chutes and Ladders™ with division facts on each space.

You might want to check out the premade lesson plans from Homeschool Planet that are available for Math Facts that Stick. You can sign up for a 30-day FREE trial.