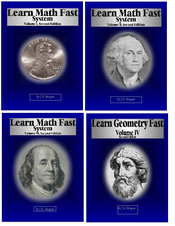 The Learn Math Fast System is a unique approach for teaching math that condenses the process while still stressing conceptual understanding. Presented in only seven volumes, the content covers the essential math content for grades 1 through 10 plus some content of a second year algebra course. Books are printed in black-and-white with a limited number of illustrations, yet they are easy on the eyes with a large casual-style font. The sixth bookI adds some color, especially for like terms so that students can easily identify them.

There are frequent work sheets and occasional timed tests. Each chapter concludes with a test, and there is a final test. Answers with solutions for worksheets and tests are at the back of the book. They were purposely included so that students could check their own answers and discover where they might have gone wrong. Since they include solutions, the answer keys have a substantial number of pages. You might need to remove those pages if your child might be tempted to take shortcuts by looking at answers and solutions too soon.

Worksheets and tests often have lesson material on the reverse side so you cannot remove those pages. The publisher is aware of this issue and has made printable worksheets and tests for each volume available for free on their website. (The publisher generously authorizes you to reuse books over and over if you wish. If you choose to photocopy worksheets or tests, that is allowed.) If you have an older student who is serious about learning, they might work through the book independently, writing directly in the book and self-checking as they go.

Volume I begins by using pennies that you supply to teach math fact families, covering both addition and subtraction. By page 79, it has covered up through four-digit addends, minuends, and subtrahends along with the skills of carrying and borrowing. It continues through multiplication and division, also teaching these together since they are so closely related. It teaches up through long division with two-digit divisors. Decimals are taught in this section, and they are sometimes included in the divisor or dividend of a problem. Basic computation skills are covered in the first three of four chapters. Interestingly, students need to memorize only eleven math facts since the rest are covered by “tricks” taught through this system. The smaller fourth chapter has four lessons on standard measurements.

A student completing the first volume will have covered the most important math skills taught through third grade. There are no diversions to cover geometry, graphs, the calendar, telling time or other topics typically thrown into the mix for the primary grades. With only 199 pages of text, worksheets, and tests this is an efficient way to cover basic computation skills.

Because of its design, I think Volume I will probably be great for gifted learners who are ready to plow ahead with math and for older students who have not done well with other math programs and need an efficient way to get up to speed.

Volume II uses money to explain fractions, quickly moving through decimals which were already introduced in the first volume, and continuing through percentages. It concludes with a final chapter on positive and negative numbers. With 116 pages of text, worksheets, and tests, students can complete this book rather quickly if they grasp the concepts, yet it covers key concepts taught in both grades 4 and 5.

Volume III teaches pre-algebra concluding with a final chapter that offers in-depth instruction on slopes and intercepts. Again, this is accomplished in only 119 pages of text, worksheets, and tests. Content of this book is similar to some of what you find in other texts for grades six, seven, and eight, and it goes farther than most in its instruction on slopes and intercept.

Volume IV teaches basic geometry, reversing the typical coverage of pre-algebra to before rather than after introductory geometry. This enables the text to apply algebraic skills in geometry, although they are not required very often in the relatively brief 105 pages of text in this volume. A small kit of manipulatives comes with this text to help provide a more concrete learning experience. The final chapter of this book addresses the metric system. The content of this book reflects geometry instruction that shows up in grades 3 through 7 in other texts.

Volumes V and VI together cover first year high school algebra and some concepts from Algebra 2 but at a less challenging level than most other resources. Students using the first four volumes in this series are likely to be tackling algebra at least by eighth grade if not sooner, so a less challenging approach makes sense. Volume V covers foundational concepts that are sometimes now taught in pre-algebra courses: integers, rational and irrational numbers, variables, coefficients, factors, absolute value, multiplication and division of exponents, square and cube roots, and the commutative and associative laws of addition. Some of this was introduced in Volume III, but Volume V reviews and takes these concepts to a higher level. Students also work with the distributive law of multiplication, factoring, prime factors, working with polynomials and solving quadratic equations. There's even an introduction to functions. This book has 243 pages.

Volume VI teaches much of algebra through applications. Time/distance/rate problems and solution and mixture problems are used extensively as platforms for learning algebraic applications. In 232 pages, this volume also covers congruent and similar triangles, probability, functions, solving and graphing equations with two variables, and solving and graphing quadratic equations. Some of this would be equivalent to what is taught in second year algebra, but it does not cover the same material at the same level as in second year algebra courses such as those from Saxon, BJU Press, and Math-U-See. Students are ready for geometry after completing this course, but they could also transition from this book into an Algebra 2 course. There are fewer practice problems per worksheet at this level, so you might want to supplement with additional practice worksheets such as those from Kuta Software or math.com.

Volume VII can be considered a high school level geometry course, but it should not take as long to complete as most other courses.

The content of the course is presented under five chapter headings: Angles, Triangles, Quadrilaterals, Polygons, and Circles. The author points out that students should already know some basic geometry including the Pythagorean Theorem and how to solve for areas, circumference, and volume. Students also need to have covered enough algebra to know how to solve algebraic equations.

As with the other Learn Math Fast courses, it doesn’t follow the same sequence of topics as do most other courses. The most unusual feature is that trigonometry is taught (introductory level only) within the geometry lessons. Formal proofs are taught in the sixth lesson (out of thirty lessons in all), then used from that point on.

The course covers the most important topics for geometry but misses some minor topics such as translations.

For each chapter there is a Smart Card that lists the key postulates and theorems on a two-sided page printed on card stock. A pocket at the back of the book has four small reference cards with additional triangle postulates. All of these are to be used for quick reference as needed.

While the text includes worksheets, chapter tests, and a final exam, students might need more practice and reinforcement, or you might also need to supplement to ensure that your student satisfies any requirement for a certain number of hours spent on the course. They might use free worksheets at websites like Kuta Software or supplemental books such as Scratch Your Brain Geometry.

Concepts in this series are not taught in the same order as in most other math courses which makes it tricky to move in or out of the series. However, I appreciate the author's logical reorganization of topics in a way that builds understanding.

The series is more efficient than most other programs partly because concepts taught in a previous level are not retaught and reviewed over and over as in most other math series. While there is some review, it is minimal. Students are expected (and sometimes directed) to refer back to another book if they haven’t got a solid foundation in a particular topic. There are also fewer practice problems in the upper level books than in most other programs.

The thorough and clear explanations might make the Learn Math Fast System an appealing option for parents with a poor math background who need to learn right along with their children as well as for students working independently. In addition, the fact that the books are self-contained and reusable coupled with the publisher's provision of free printable worksheets and tests makes them affordable.

There are free placement tests on the publisher's website, and free phone or email support is available to those who have purchased the series.