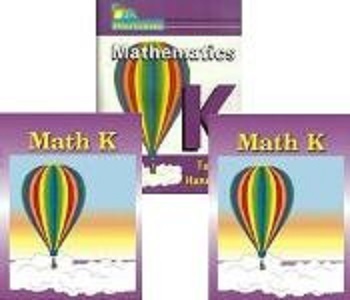 Math K is intended to be used together with the American Language Series, but it can be used as a stand-alone course. The course consists of two student workbooks and a teacher handbook. Math K needs to be presented by the parent or teacher using lesson information in the teacher handbook.

The student workbooks are printed in full color. Illustrations in the workbooks are a little dated, but this will not be obvious to most children.

The large letter K on the front of the books clearly indicates this is intended to be used for kindergarten, but it is more academically advanced than some other kindergarten programs. Because of this, you might move at a slower pace, even using the course for at least part of first grade.

Math K begins by teaching recognition of numbers and their values with students tracing then writing numbers. After the introduction of numbers one through nine, the course picks up speed by introducing simple addition equations. From that point, it continually reviews easier concepts while rapidly introducing new ones. Students learn to count by twos, threes, fours, fives, and tens. They learn addition and subtraction with numbers up to 99, but only for problems with a single digit added to or subtracted from a single-digit or double-digit number—no borrowing or carrying is involved. Other concepts covered include number lines, place value for ones and tens, colors, shapes, comparative sizes, telling time, money, the calendar, and right and left.

The teacher handbook provides step-by-step lessons that make the course easy to teach.