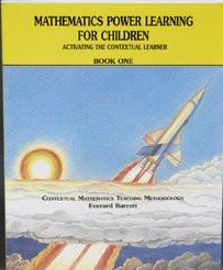 Professor B Math is an unusual program that was created by Dr. Everard Barrett. Three courses in this series cover the major arithmetic concepts taught in grades one through six. He has also written algebra courses.

The course books for Professor B Math are titled Mathematics Power Learning for Children: Book One, Book Two, and Book Three. While the publisher’s website says that the books cover concepts for kindergarten through eighth grade, I would suggest Book One for kindergarten through second grade, Book Two for grades three and four, and Book Three for grades five and six. (The levels at which math concepts are taught have shifted to earlier grades since Dr. Barrett originally wrote this series.)

Within the three courses, Professor B Math covers addition, subtraction, multiplication, division, fractions, decimals, and percents. It does not cover topics, such as telling time, money (other than within the context of word problems), geometry, graphs, and Roman numerals—topics that most math programs include. The choice to concentrate on arithmetic skills was purposeful, but it does make it a little awkward to figure out how to cover the other math-related topics.

As Dr. Barrett explains, the methodology—called “contextual mathematics teaching”—is based upon the idea that the “awareness of mathematics is best retained by reconstruction rather than memorization… and was created to eliminate rote learning” (from the preface to each book). Rather than memorization and drill, students respond orally (in unison if it's a group class) to reinforce conceptual learning that has already been demonstrated with fingers, bundles of sticks, or pictures on the board. For each new concept, children first learn how and why it works, then they are taught the computational strategy that is commonly used.

Each course has a consumable student workbook and a book that is used by the teacher to present the lessons. Power Learning Charts, a third book used along with Book One, has ten charts that are used as visual aids to help children master addition, subtraction, and multiplication facts. All of the books are printed in black and white.

Aside from skipping peripheral math topics, there are other features that set Professor B Math apart from other programs. You might have noticed that there is no student textbook; the student has only a workbook. The program is teacher-intensive, with the teacher directing learning most of the time by using scripted questions along with a chalkboard or whiteboard. The teacher’s book provides every step in the lesson, showing the teacher what to write on the board, what to ask students, how to present interactive activities, and which workbook problems to assign when. In addition, the teacher leads children through oral response practice using visual aids, charts, oral problems, and the board.

The course content is not broken down into daily lessons. The material in each book is presented under concept headings such as “Adding Two Large Whole Numbers (without regrouping)” and “Preparing for Multiplication by Two or More Digits.” Under each heading, one or more concepts will be taught, with each concept followed by problem-solving practice in the workbook. You might stop after each concept, or you can teach two or more concepts in a day.

Uninterrupted lesson time is very important in this program since ideas build one upon another within each lesson—from teaching a concept through problem-solving practice. Teaching time required will vary from day to day. On the publisher’s website, they say that it should take from 10 to 45 minutes per day.

In this program, the student workbooks are truly secondary, although they are still essential. The workbooks reinforce new skills through guided and independent practice, sometimes requiring the teacher to interact during the practice time. Separate answer keys are available for each workbook upon request.

You might want to purchase popsicle sticks to use with multiplication lessons, but other than that, you will not need to buy anything to teach through all three levels.

You should be able to cover the content of these books in much less than the approximately six to seven years it takes in most programs. This leaves plenty of time to teach other peripheral math concepts that aren't covered in Professor B Math. You can consult state standards or the scope and sequence of a math program that is comprehensive to determine what other topics your child needs to learn. You might also be on the lookout for inexpensive supplemental math workbooks (e.g., the Kumon Geometry & Measurement series or Step-by-Step Math: Telling Time)  or real-life applications to cover those topics.

The Instant Master Teacher version of this curriculum also is purchased as three levels covering similar content as the textbook version. The PowerPoint slides run on the Microsoft PowerPoint® program, which is required for this product. In this version, the teacher scripts appear on each slide for the teacher to read aloud to the student. The student responds to the images on the screen for the drills and games. The teacher has control over the amount of repetition and review is needed for mastery, just as in the textbook version.

Professor B Algebra comes in three consumable volumes and covers all of high school introductory and advanced algebra topics. The paperback (8 ½ x 11) worktexts contain both instruction and practice problems in each volume, as well as answer keys. (I have not reviewed these courses.)

Professor B Math also sells an optional series of Teacher Training videos called Pathways (as downloadable files). The author, Dr. Everard Barrett, demonstrates many of the strategies for teaching Professor B Math. There is one video for Book One and two each for Book Two and Book Three.

The Professor B Math program up through sixth grade is for the teacher who wants to do the teaching, as well as for those who want a program that helps children develop strong conceptual understanding. Parents who are concerned about the direct teaching time required need to keep in mind that the time invested in this program will probably be offset by the time saved on repetition and review in the future.

Instant Master Teacher :
PowerPoint downloads for Level One, Level Two, or Level Three - $37.00 each
workbooks - $16.50 each