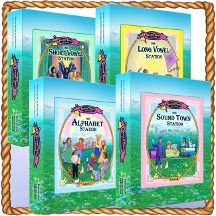 Sound Town Phonics is a delightful, multi-sensory phonics program presented in four parts: Alphabet Station, Short Vowel Station, Long Vowel Station, and Sound Town Station. You can purchase a set of all four parts, or you can buy only those you need.

Each of the four parts of the program comes in a box and includes a number of items. A Teaching Booklet in each box first gives a brief overview of what will be taught then gives more explicit instructions that tell you how to use the different components in the box. Sometimes you will use the components sequentially, while at other times, you will probably use more than one component at a time. This is one of the weak points of Sound Town Phonics; for the most part, it leaves it up to parents and teachers to figure out when to introduce the different components. The colorful components need to be cut out or, sometimes, assembled before you begin teaching.

Sound Town itself serves as a theme for the entire program. Sound Town is an imaginary western prairie town from the early 1900s. Two children, Audrey and Joseph, are used along with other characters in some of the games, stories, and hands-on activities. Almost all of the Illustrations reflect the Sound Town theme with farm and small-town settings from more than a century ago.

The entire program is highly interactive and needs to be taught by a parent or teacher. While it should work in a small group class, it is ideal for homeschooling families teaching one or two children.

The goal of Alphabet Station is to teach children the letters of the alphabet and their sounds. Twenty-six small, folded “booklets” each present a letter on the cover with a key word picture on the inside to teach the letter’s primary sound. You might want to introduce the Alphabet Beginner Writing Sheets at this time. These sheets provide large models of lower case manuscript letters for children to trace then write. When children are ready, you can move on to the Alphabet Writing Sheets which cover both lower- and upper-case letters with smaller models and lines on which to write. You can wait to introduce printing until later if a child is not yet ready.

Alphabet Flashcards can be introduced after the Alphabet Folded Books. You might want to use the Alphabet Wagon Train at the same time. Four different ways to use Alphabet Flashcards are presented, and you can use the variations to keep lessons interesting. The Alphabet Wagon Train has a colorful wagon for each letter with a pocket on the back where you are to insert cards with the key word images. There are multiple cards with images for letters that make more than one sound—letters like the vowels, and the consonants c and g. At this point, all of the common sounds of each letter are taught together. These wagons will take up a bit of space. While you might mount them on the wall with sticky putty so that you can easily remove them as needed, you might instead work with a few of them at a time. The Wagon Train Coloring Book reinforces lessons at this point.

I can envision alternating flashcard and wagon train lessons since both work on letter and sound recognition within words. However, you can use program components in whatever order you wish.

In Short Vowel Station, children learn to blend sounds of individual letters into words. The Blending Band Chart is the starting point. This colorful chart has children practice blending various consonants on cards with vowels pre-printed on the chart. They practice blending consonant-vowel combinations then vowel-consonant combinations.

The next four activities described in the Teaching Booklet can be used as you wish. I would probably vary lessons using different activities each day, perhaps working with only short-a words one day and short-e words the next— in some way limiting the number of new words each week to something manageable that repeats common patterns.

Short Vowel Folded Books are single-fold “booklets” with a short-vowel word on the front and the image inside. Short Vowel Word Cards show vowels in blue and consonants in red for 120 consonant-vowel-consonant words. The Short Vowel Word Building Kit is a manipulative for forming words from movable letters on cards. Instructions for this activity direct you to have children write words that are created on a lined writing sheet. The next activity, Short Vowel Word Families, consists of large cards with the ending vowel-consonant combinations common to many short-vowel words—endings such as at, ed, and in. You display an image of a word that can be spelled with the correlating ending, and your child will figure out which consonant they need to begin the word.

Once children have learned how to read short vowel words, you will need to introduce the words I, a, and the which are not taught by the program itself. You might do this as the words occur in the Short Vowel I Am Reading Books which are used at the end of Short Vowel Station. These five short-vowel readers have brief phrases or sentences for children to practice reading on just six pages per book.

Long Vowel Station begins by teaching the “jumping e.” As the program explains, “The Jumping ‘e’ wears a pair of sneakers. He quietly jumps over the consonant and tickles the vowel until it says its name.” As in Short Vowel Station, there are Long Vowel Folded Books, Long Vowel Word Cards, and a Long Vowel Word-Building Kit that might be used interchangeably as you work on particular word families. Long Vowel Sliding Charts let children practice creating new words by changing the letters or pairs of letters at the beginning of long-vowel word endings such as ide and one. The four Long Vowel Station I Am Reading Books will require you to introduce the words an and my on your own.

Sound Town Station has more components than the other parts of the program. Children will be learning the remaining 43 phonemes, such as ear, sh, and tch, that are taught in Sound Town Phonics. Seven units divide the phonemes into groups for teaching. Two-syllable words are also taught.

The Sound Town Wall Chart Kit is your primary visual aid used throughout this part of the program. You will need to cut apart words and image pieces that will be used with the chart for each unit in advance. Writing and coloring sheets for the unit need to be on hand as well. Two Sound Town Adventure CDs introduce each unit through story, song, and brief instruction. The singing and the dramatized storytelling on the CDs are both very well done.

You will begin to teach each unit by listening to the CD with your child. Phonograms and images are put on the large wall chart as they are introduced. Children can use coloring or writing sheets while they listen or at other times. The Sound Town Poetry Anthology introduces poems for each unit that incorporate the phonemes being taught. Sound Town Flashcards and the Sound Town Word Building Kit provide practice in word building and phoneme recognition. Children should also practice writing the words on a reproducible writing sheet that is included. Sixteen Sound Town I Am Reading Books provide children with practice reading phrases and sentences.

The Sound Town Tutor Kit covers some of the same territory as Sound Town Station. It might be used with students who need to focus only on the advanced phonemes. The Alphabet By Color Book Kit has an alphabet-based story book and companion coloring book that complement Alphabet Station. The Sound Town Adventure Kit includes the same audio CDs found in Sound Town Station along with a book that includes an illustrated version of the script of the CDs for those who want to read about the adventures of Audrey and Joseph.