Chronicles of Dinosauria: The History and Mystery of Dinosaurs and Man 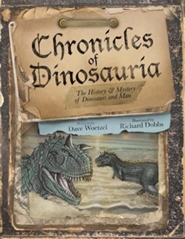 Most “creationists” who have read or studied even a little regarding the origins debate have heard of the discovery of footprints of both humans and dinosaurs at the Paluxy River area of Glen Rose in Texas. Evolutionists claim to have disproven it. End of story? Not at all!

In Chronicles of Dinosauria, author Dave Woetzel lays out the evidence that dinosaurs and man have coexisted on earth, and that there might well be a few remaining dinosaurs alive even today. This is a very specialized topic within the origins debate, but one that is both fascinating and important.

Woetzel’s goal is to present “the evidence that dinosaurs and man coexisted for the reader’s consideration.” That evidence comes from five different areas: biblical, historical, artistic, fossil, and cryptozoological (p.6). For those unfamiliar with the term, cryptozoology is research into “reports of animals that have yet to be proven to exist.” The Loch Ness monster would be the most well-known example, but there are many other current cryptozoology investigations.

This is the sort of book that just begs for you to pick it up and explore it. The cover art is great, and it’s full of gorgeous illustrations and photos. My first impression was that it was written for children because of the length of the book and the plentitude of illustrations. However, while it is only 84 pages long and can be read fairly quickly, the vocabulary as well as the need for some historical and scientific understanding makes it most appropriate for teens and adults.

I appreciate the scientific evidence, but I found the artistic and literary evidence surprisingly convincing. I didn’t know that “there is a universal Flood belief in the traditions and language of every major nationality… (over 270 in all)…” ( p. 19). One has to wonder how 270 different cultures came up with a tale based on the same catastrophic event if there were not some basis in fact. This book reveals a similar situation in relation to dragons. Dragons show up in the literature, history, and art of countries all over the world, even up until the eighteenth century. And dragons are discussed in many written works as actual living creatures rather than mythical monsters.

The book does not try to address broader questions such as the origin of life, genetics, or Big Bang cosmology. Instead, it sticks fairly closely to its agenda of providing evidence for the coexistence of men and dinosaurs. It assumes a belief in the Bible as the inspired Word of God. While there is an invitation to accept Christ at the end of the book, I think it’s most likely to appeal to Christians who have already done so and are trying to sort out all of the conflicting arguments and evidence regarding creation and evolution.

Even if you do not share Chronicles of Dinosauria’s young-earth, creationist viewpoint, the material it presents deserves consideration on its own merits.