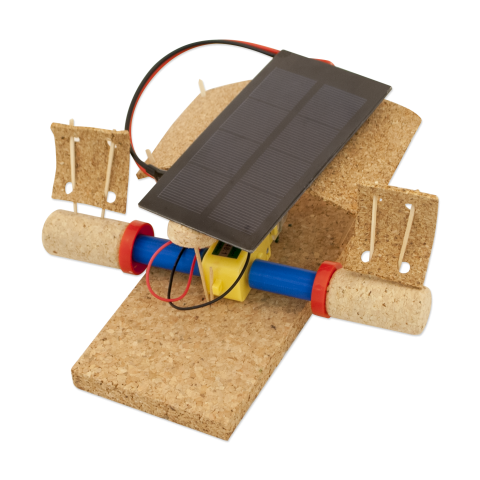 Based on the work of KidWind, an organization formed to help educate children about renewable energy sources, REcharge Labs has produced a few easy-to-use kits for learning about wind or solar energy. However, most wind kits are only available for larger groups at present while there are three solar kits sold as single kits (generally useful for one to three students). Class Paks generally include five of each kit and will save you money if you are working with a larger group. You can also purchase individual items to create your own projects.

Kits are designed for different age ranges, some for as young as kindergarten while others are best for older students.

Four wind kits available for class groups are the MacGyver Windmill, the Sail Car, Firefly (generates wind energy), and a Mini Windmill. The Firefly kit is the only one of these that is also available as a single kit. Three solar kits available as either single or class kits are the Solar Cork Boat, Solar Scavenger Hunt, and Solar Fountain, while there is only a class kit for the Solar Town.

You can download any of the instruction guides for free (linked from each product’s page) so that you can see in advance what might be accomplished with each kit.

You will need a few additional items as you work through some of the kits, so check ahead. Items not included in the kits are generally already on hand or easy to get such as scissors and tape

I received the Solar Cork Boat Kit for review. It should be representative of the design of the other kits.

Suggested for grades 4 through 12, a “single” kit will serve from one to three students.

In spite of the age designation, I used it with my very bright six-year-old grandson. We didn’t use all elements of the lessons, but we did experiment with the two different types of motors and two propellers as well as using the two motors in parallel so that the boat was simultaneously driven by a propeller and two paddles.

Parental supervision is required since you are working with electrical connections and power. Children need to pay close attention to what they are doing and think ahead. For instance, they need to consider how they might arrange propellers and paddles so they are clear of obstacles. They also need to figure out a way to mount the solar panel that supplies the power.

The illustrated directions were very clear for the most part. There were only two points that I found unclear—how to connect the motors in parallel and what material to use for the paddles. The image used for this review shows using cork from one of the cork sheets in the kit for the paddles. However, the instructions don’t specify or show this. We used a thinner but stiff plastic I had on hand, poking holes in it with an icepick; I think this actually worked better for paddles than would the cork. (This might be another variable that students might test.)

Boat builders can get creative and dress up their boats with lightweight materials if they wish. But then they also need to consider how to offset extra weight. Extra cork sheets might also be used to raise the boat a bit to offset weight you might add.

The 16-page instruction booklet lays out lessons that can be done in either two or three 45-minute class periods. Homeschoolers might just make a day of it rather than break it up.

In the process of building their boat, students learn a number of scientific principles such as mechanical and electrical work, the use of solar energy, basic circuitry, and buoyancy. They also have to apply a serious amount of critical thinking to figure out what might work best. While students are learning scientific principles inductively, it is up to the parent or teacher as to how much technical explanation to provide. Some explanation is provided in the instruction booklet but not on every concept. A data worksheet in the booklet should be used to keep notes on various designs and trials. You are given permission to reproduce pages in the booklet, but only for your class group.

As I mentioned, this kit is intended for older students, and my grandson needed some assistance screwing corks onto the screw hubs and with constructing and mounting the paddles. Students in fourth through eighth grades are also likely to need at least occasional assistance although teens might not.

We were able to accomplish a lot in less than two hours, constructing and testing a number of variations although we did not record data.

I was surprised at the complexity that was possible within just this one kit. It would have been easy to stretch it out for at least four hours worth of experimentation and data-recording with older students. Using it in conjunction with more extensive lessons on one or more of the scientific concepts would be even better. The same is likely true of the other kits. Check out the instruction guides for yourself to see which kits might work for you.