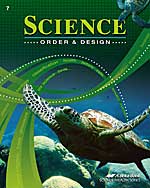 This book should be thought of as part one of a two-year science course for seventh and eighth grades. Part two is contained in the A Beka text, Matter and Motion. Because the two books are closely related, I discuss common features here.

These books feature a relatively large type style that makes them easy to read. Illustrations, hands-on experiments, a colorful format, and a lively writing style make Science: Order & Design appealing to the average seventh-grade student. Matter and Motion's style is a little less lively. While these texts still feature mostly questions of the rote-recall variety, section reviews in both books include "Thought Provoker" questions that expand student thinking. End-of-chapter questions in Order & Design definitely move beyond the recall level with questions that require thoughtful explanations such as “Contrast the assumptions of materialism with what the Bible teaches” (p. 173).

Both books would be considered "general science" with a broad range of subjects. Order & Design includes: plants, animals, insects (including instructions for making an insect collection), the human body, birds, fish, reptiles, amphibians, classification, microscopy, creation (including conflicts with evolutionary theory), and ecology.

Both books have an entire chapter devoted to the conflict between creationism and evolution, presenting a vehement biblical creationist viewpoint. In fact, this viewpoint shows up throughout both books rather than being isolated into the one chapter.

The previous edition of this text was titled Science: Order and Reality. That previous text included introductory concepts for physical science, atmosphere, and weather. I suspect those topics might show up in the next revision of Matter and Motion, since it, too, is due for an update.

One very helpful addition to Order & Design is the inclusion of Chapter Reviews directly in the student text. Reviews include identification and comprehension questions, but as I mentioned earlier, they also have thought questions that will require lengthier responses.

The course has many components: student text, teacher edition of the student text (with the answers in the back plus scope and sequence and lesson plans), test book, test key, quiz book, quiz key, activity book, and activity key. The Science: Order & Design Activity Book is a new component. I have not seen it but A Beka Book';s website says, that it “Contains 37 activity sheets for a thorough review of the terms and concepts presented in each chapter.” So it sounds like it helps students learn the material but should not be mistaken for a hands-on activity book.

It seems to me that there might be plenty of material with the text alone. However, you might want the tests so that you will have cumulative tests rather than just the Chapter Reviews in the book. I would want to see the other items before purchasing to make sure they are worth using.

The A Beka health text, A Healthier You, is intended to complete the science curriculum for seventh grade. It should take about eight weeks of the school year time allotted to science, with the remaining time to be used for Order & Design.