Viruses and Vaccines: Smallpox to COVID-19 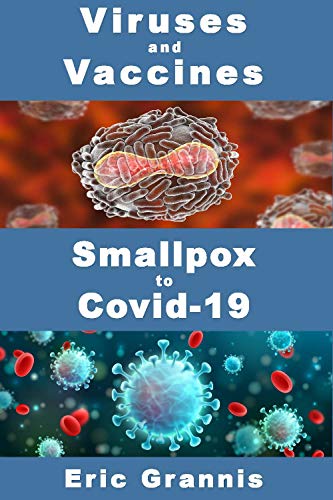 Viruses and Vaccines is a heavily illustrated, 96-page book that educates the reader about viruses and vaccines with an ultimate goal of encouraging the acceptance and use of vaccines. It builds toward this message by telling the stories of major viruses and how medical science has learned to combat each of them.

Author Eric Grannis (who also wrote The Mystery of Metal and The Science of Steam Engines) begins by telling the story of smallpox and the successful fight to eradicate the disease. He relates stories of how people made incremental advances, building on what others had learned over time, and how they struggled to overcome public fear and resistance. For instance, we learn that Cotton Mather, more well known for his preaching than his medical expertise, researched the concept of inoculation and encouraged eighteenth-century Bostonians to adopt the practice. A doctor, Zabdiel Boylston responded by inoculating his own son against smallpox, then others. Benjamin Franklin became a supporter of inoculation after one of his children died from smallpox. His research revealed that in Boston only two percent of those inoculated had died, while 15% of those who were not had died. Inoculation became a much easier sell with evidence of success and influential voices speaking up in its support. Inoculation gradually gained acceptance in England as well as in the United States, even though the English were skeptical of ideas originating in America.

The story then shifts to the invention of vaccinations and how they differ from inoculations. A country doctor named John Fewster realized that infecting people with cowpox, a less dangerous disease, might protect them from smallpox. (I was surprised to learn that the word vaccination is based on the Latin word vacca, which means cow.) Fewster didn’t pursue the idea. It was Dr. Edward Jenner who actually developed and used cowpox vaccinations, and the vaccinations turned out to be safer than inoculations.

In the middle of the book, Grannis inserts an explanation of the structure of the smallpox virus, how it attacks cells in the human body, and how the body fights back. This helps the reader understand the science of vaccines.

Next, we learn about influenza and its major outbreaks, from the Spanish Flu of 1918 up to recent times. Grannis explains how flu viruses mutate and how vaccinations have to be updated every year to be able to fight the mutated viruses. This is followed by a briefer discussion of treatments for polio.

The final topic is the coronavirus pandemic. Grannis presents the best explanation I’ve yet seen of the difference between other vaccines and those created to combat COVID-19. Essentially, the Covid-19 vaccines skip the introduction of the live virus by introducing directly into the body the messenger RNA that would have been created by the body in reaction to an injected virus.

Grannis concludes with a very strong statement urging universal vaccination. He says, “Everyone who can get vaccinated should do so. Not only does this protect the recipient of the vaccine, it also prevents infectious diseases from spreading to others including those who can’t get vaccinated because they are immuno-compromised and infants who aren’t old enough to be vaccinated.” Grannis does not address scientifically based concerns about these new types of vaccines.

The full-color illustrations throughout the book, including many historical images that were created at the time of contemporary events, make it easy to read and understand. I would recommend it for an audience about ages 12 and older. It assumes some prior understanding of cellular structure, but more importantly, disturbing images such as those of pustules and children in iron lungs might be inappropriate for a younger audience.

Viruses and Vaccines: Smallpox to COVID-19