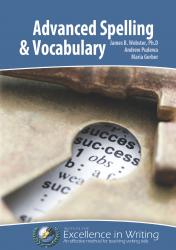 Advanced Spelling & Vocabulary is an unusual approach to teaching both skills that should be especially useful to those pursuing a classical education. It is very similar in concept to IEW’s Phonetic Zoo (Excellence in Spelling) program for younger students.

The entire program is on either two CD-ROM discs or downloadable MP3 files. PDF files provide instructions and word lists with definitions. Instructions are written directly to the student so that they might work independently. Words are taught within the categories of art and architecture, Bible and theology, business and economics, government and law, Greek and Latin word roots, health and science, literature, music, and words drawn from the ACT and SAT exams. There are four lessons within each category with 24 words per lesson.

There are two audio files for each lesson with each file running about six to eight minutes. In the first audio file each word is pronounced by Andrew Pudewa or Cameron Covey. Following each pronunciation the speaker uses the word in a sentence. These sentences are not definitions, but they often make the meaning clear. For example, the sentence for personification is, “Welcoming refugees into New York Harbor, Liberty was a personification of freedom for the masses.”

Words are sometimes those that might be rarely encountered outside study of that area. For example, art and architecture words include Vitruvius, symmetira, dispostitio, peripteral, and iconostasis along with more common words such as parapet, embrasure, campanile, and petroglyph. In the Bible and theology section are words such as prodigal, cherubim, Belteshazzar, blaspheme, concupiscence, Monothelitism, presbyters, sepulchre, and soteriology. (Note that sepulchre is the British spelling, while the more common U.S. spelling is sepulcher. The word color is presented as either colour or color. While these were the only concessions to British or UK spellings I spotted, there might be others.) While biblical and religious words are included in the lists, no religious viewpoints are expressed.

Students begin by listening to the words and their sentences, then attempting to spell the words without having studied them. In the second audio file for each lesson, Pudewa and Covey pronounce and spell each word, then read the definition. Definitions are also printed in the PDF files, but students should keep a dictionary handy to check on alternate definitions or usages as well as to identify the part of speech or origin. (Origins are given in the section of Greek and Latin word roots.) The PDF definitions sometimes also include phonetic pronunciations. As students listen to the second file, they are to write the words next to their first attempt. After doing this, students compare their first attempt with the correct spelling, circling those words they spelled correctly the first time. Those misspelled are to be crossed out and rewritten correctly. Students should work on the same list until they get 100% two days in a row, most likely every day for five days. After every four lessons (an entire topical section), students should ask someone to quiz them on those words.

This is a challenging course that might even appeal to adults. I found many words with which I am not familiar or cannot spell, including the eternally-problematic word hors d'oeuvre. I would hesitate to give this course to a student who struggles with spelling since having to guess at the words the first time around could be too discouraging. For such students, you might have them listen to the spellings and definitions before attempting to write the words. Another possibility for struggling spellers is to consider having the student work through one or more levels of the Phonetic Zoo to strengthen general spelling skills before moving on to the Advanced Spelling and Vocabulary program.  Parents can give their student the spelling placement test for the Phonetic Zoo on the publisher's website (www.excellenceinwriting.com/spellplacetest) to determine whether Phonetic Zoo might be a better fit and, if so, at which level to start.

In my opinion, the ideal audience for Advanced Spelling & Vocabulary consists of students who already have a good vocabulary and who are competent spellers who need to be challenged. You might find this course particular suitable for strong auditory learners. Visual learners might need to have the PDFs to read along as they listen for better comprehension. It certainly is easy to adapt the course to fit your situation.

Regarding your purchase options, while I appreciate the convenience of having everything on the CD-ROM discs, I think I would generally recommend the downloadable version. Both versions include the printable/viewable PDF files, but the downloadable audio files may be played on a variety of devices while the CD-ROMs run only on your computer. This flexibility might be important so that students are not tied to the computer.

CD-ROMs - $39.99, digital audio files download - $29.99
Please consider clicking here to use my affiliate link to purchase directly from the publisher.