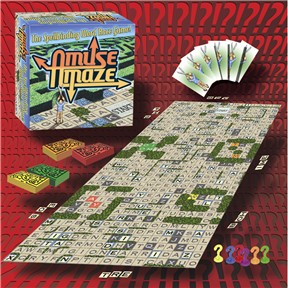 I spotted this game at a homeschool conference because it was laid out for play and looked intriguing. It looked like it might be a bit complicated, but when the exhibitor was able to explain how to play in just a few minutes, I was hooked.

AmuseAmaze™ is a spelling game that can be used to reinforce (not teach) spelling skills. This is so much more fun than spelling workbooks! Children need to know how to spell plenty of three and four letter words to be able to play without too much frustration. That could be as young as third or fourth grade level. But the game is also fun for adults to play.

Play varies depending upon the number of players. The board comes in 18 separate pieces, but the number of board pieces used depends upon the number of players: 15 for two players, 16 or three players, and all 18 for four to six players. Board pieces each have 36 squares with letters on many squares plus garden hedges and a few other special squares to make play interesting. The hedges end up creating a maze that limits where players might move. There's no predetermined order for the board pieces other than those with “target squares” so the game layout and play will likely be different every time you play.

The goal of the game is to move through the different squares by spelling words, while trying to collect colored “target cards” by landing on or crossing “target squares.” Short words might get you there in a direct path more quickly than longer words; so more-knowledgeable players don't necessarily have an advantage. Players can move in all directions to spell words, including diagonally. They move to the final square of the word spelled each time. The educational value lies in the mental spelling players have to run through to determine where they might make a word that takes them in the direction they wish to go.

Play gets even more interesting because a sack full of letter tiles is laid out on blue squares at the start of the game. In addition, each player gets to draw three letter tiles. Tiles on blue squares can be picked up by players to be used to help spell words later on. Tiles “owned” by a player can be laid down over other letters to help spell words—really helpful when you are surrounded by consonants and happen to have a vowel tile handy!

Garden hedges block movement, but each player has one “Gardener Card” that can be used to cut through a hedge one time.

This should be a great family game, especially if older players help younger players—those who won't be offended—with suggestions from time to time.