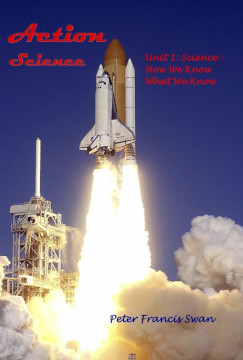 Action Science offers a series of four physical-science units for students in grades six through eight. The four units can be used together in one year for a complete physical science lab course, or they can be used individually if you also want to cover other areas of science each year. The four units are:

Each unit has both a student book and a teacher’s guide, and these are available as either printed or Kindle books. (Note that the Kindle versions are free to those with Kindle Unlimited, but Kindle versions are very inexpensive if you need to purchase them.)

The first unit should be used before the others, but then the order in which the other three units are used doesn’t matter. Together, the four units cover all of the middle-school physical science requirements as laid out by the National Academy of Sciences K-12 Science Framework and the Next Generation Science Standards. The perspective of the units is secular, but this shows up only in rare instances.

The four units are written for use by homeschoolers and distance learning situations, although they will work great for group classes as well. Parents and teachers should be involved in decisions about how much of the lesson material to use, particularly when it comes to the math and the Extending Ideas sections (described below).

The teacher’s guides have brief information about the units and how to use them, a chart showing supplies needed for each lesson, and occasional notes with additional information for a lesson  (optional). They also have complete answer keys with explanations for experiments, practice problems, and Extending Ideas.

Each unit has four to six chapters, with a number of lessons within each chapter. The format for each lesson varies to suit the content. All lessons include text with occasional illustrations, photos, or charts. Some lessons include an experiment or activity, a set of practice problems, or a section titled Extending Ideas.

The style of writing and the content should be easy for students working independently to understand. Author Peter Swan often relates information to things with which students are familiar. Vocabulary words are in bold, and their definitions are in sidebars.

The experiments and activities require relatively simple and inexpensive resources that you should be able to obtain easily. In the unit involving chemistry, isopropyl alcohol is the only chemical used that might be somewhere other than in your kitchen cupboard. (Students will also use baking soda, baking powder, vinegar, water, and cornstarch.) Students will need resources like a spring scale, magnets, a graduated cylinder, and a digital thermometer. For items that might not be as easy to find, such as the graduated cylinder, Swan recommends sources. Experiments and activities include instructions, record-keeping charts for students to record observations, and questions to help students analyze their results. There isn’t space for students to write answers to the questions in the books, so they will need a separate notebook for that purpose.

The practice problems might involve definitions of vocabulary words, critical thinking, applications of lesson content, or mathematical calculations. For instance, lesson 2.4 in the student book for Unit 2: Stardust teaches about solubility, and one practice problem for this lesson asks, “The solubility of a drink mix in water is 40 g per 100 ml at 20 ºC. Will 250 g of mix dissolve completely in 1,000 ml of water?”

The optional Extending Ideas are interesting applications that might involve math, critical thinking, research, or creativity. Many of these are the type of questions scientists actually ask in their work, often in the form of a series of related questions. For example, page 40 of The Flow of Energy presents this question:

The next question follows up by asking whether a null hypothesis that was confirmed by an experiment might be incorrect because the measuring instrument used wasn't sensitive enough to identify a change that occurred. This is the sort of thinking that scientists must continually apply to ensure they have considered possible variables or errors. While the Extending Ideas sections are optional, I would encourage you to use at least some of them.

There are no tests, but there should be plenty of accountability with all of the lesson material.

Action Science’s four units offer solid coverage of physical science for middle school. They are very affordable as well as practical for both homeschooled students and their parents.

Action Science Unit 1: Science: How We Know What We Know