A Parent’s Guide to Intelligent Design 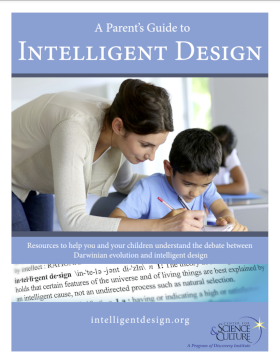 A Parent’s Guide to Intelligent Design is a free, 30-page book (PDF) that should be helpful to any parent who wants to understand the problems with neo-Darwinian evolution. Many books have been written on the topic, but most parents don’t have the time (or inclination) to read through them. This small book succinctly presents the key points.

It was created by the folks at the Discovery Institute, the think tank behind the Intelligent Design movement. The book explains intelligent design, highlighting ideas that should, for the most part, be in accord with the beliefs of all creationists. It does not address the age of the earth.

The book is presented in eight parts. I think the most useful sections for many parents will be the first three that explain intelligent design, evolution (including the nuances of various definitions), and the scientific problems with neo-Darwinian evolution. The scientific problems section summarizes those problems on three pages under the headings of genetics, biochemistry, paleontology, taxonomy, chemistry, and education. Highlighting some of the newest scientific discoveries in each area, these sections reveal how some of the major underpinnings of evolutionary theory have been disproven. For many parents, these sections offer a shortcut to understanding key areas in which evolutionary theory contradicts the scientific evidence.

Three other sections of the book help parents with children in schools where evolution is the only theory being presented. Some of the information and suggestions in these sections might be helpful to homeschoolers as well.

The final section of the book has recommended resources, including websites, books, and videos.

A Parent’s Guide to Intelligent Design is a very brief primer, so it doesn’t address every possible issue. But it’s a great resource for busy parents who need to know how to discuss the topic with their children.