Catholicism and Evolution: A History from Darwin to Pope Francis 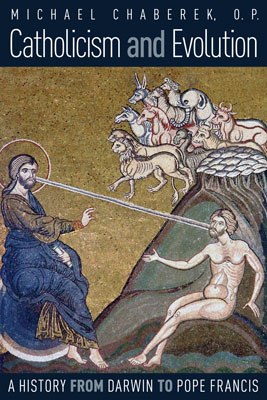 Catholicism and Evolution: A History from Darwin to Pope Francis is currently (as of May 2016) the most helpful book I’ve found for Catholics trying to sort out the origins debate in relation to Catholic teaching. While other Catholics have written on the topic, Fr. Chaberek’s treatment gives much more attention to the theological implications of various positions regarding evolution than do most others.

He explores the various positions in light of church teaching, primarily focusing upon teaching from the nineteenth century to the present. However, he also briefly discusses the teachings of Augustine and Aquinas since they are frequently used as evidence to support viewpoints favoring evolution. (In an appendix he goes back through church teaching from early church fathers to demonstrate what the church believed and taught until this past century.) Tackling theological issues skirted by so many Catholic authors, Fr. Chaberek frequently discusses the interpretation of the first three chapters of the book of Genesis and their importance in the origins debate.

To briefly summarize, Fr. Chaberek demonstrates that materialist or atheistic evolution has clearly been rejected by the Catholic Church as being incompatible. He then tackles theistic evolution in its various permutations, showing that even though such views are widely held in the Church, they all seem to lack the satisfactory explanatory power to answer questions regarding both evolution and theology.

Unlike many Catholic authors on this topic, Fr. Chaberek has read widely about developments that have resulted from the Intelligent Design movement, and that aspect takes on significant importance in this book. He clearly believes that the Intelligent Design movement has much to offer Catholics who are trying to identify a factually-based scientific outlook that aligns with the Church’s teaching magisterium.

However, as time passed, science began to make claims that rightly belonged in the realm of philosophy and religion, promoting belief in evolution as proven fact and even granting evolution the power and authority to provide explanations about the true nature of man, the purpose of life (or lack of it) and other metaphysical questions. The Intelligent Design movement arose to challenge evolutionary beliefs, not on theological grounds but on the basis of science itself. The second chapter goes on to present the explanatory power of intelligent design through concepts such as specified complexity while pointing out the limits of evolutionary explanations for macro-evolution (change from species to species).

These first two chapters serve as the groundwork for the next six chapters that cover “Early Statements of the Magisterium on Evolution,” “The Rise of Catholic Evolutionism,” “The Pontifical Biblical Commission Decrees 1905-1909,” “Evolution During the Pontificate of Pius XII,”  “The Evolutionary Vision of Teilhard de Chardin,” and “The Standpoint of Pope John Paul II.”

I am impressed by the depth of research invested in this book. Fr. Chaberek delves into documents from the nineteenth and twentieth centuries of which many Catholics have been unaware. Some of these documents actually have a higher status as far as teaching authority within the Church than do more current documents and pronouncements regarding the origins debate. Some of them clearly rule out belief in materialistic evolution and promote a more literal interpretation regarding the creation of man.

Fr. Chaberek reveals the evolutionary bias that came to dominate the Pontifical Academy of Sciences which is currently the source for most church teaching on this topic. The present academy seems to consist of only those with evolutionary beliefs, and viewpoints to the contrary are treated as non-existent. A fascinating footnote states, “Giertych [Maciej Giertych, a professor of biology] took part in the session of the PAS in 2008 as a guest without the right to speak. The session was entirely devoted to evolution. In his memoirs he wrote: ‘I was sitting silently. During the breaks I tried to debate the participants in private. In the program of the session there was not even one lecture critical of evolution, critical from the scientific standpoint. Those people, mostly retirees, have never heard of scientific research questioning the theory of evolution. With such a selection of speakers, neither will the Church hear about them.’” (p. 237).

In his conclusion, Fr. Chaberek uses a chart on page 308 to show three “basic models of the interdependency of science and revelation that can be found in contemporary theology.” (Here he seems clearly focused on Catholic theology rather than Protestant, although he is not explicit.) The chart reduces the options to either progressive creationism (coupled with the theory of intelligent design) or theistic evolution. He then breaks theistic evolution down into two options, one based upon Darwinian evolution and the other based upon the theory of intelligent design. (The chart omits a “young-earth, literal interpretation of Creation even though he discusses that position in his book.)

While Fr. Chaberek doesn’t claim any one position to be the only correct one, he seems to support progressive creationism and the theory of intelligent design.

All three models contain common elements, as well as elements that make them mutually exclusive….At the same time, they are all currently allowed in Catholic theology. This means that the teaching of the Church is not specified; rather, it accepts completely different, even contradictory, ideas about creation. (p. 309)

While Catholicism and Evolution cannot provide definitive answers regarding what Catholics ought to believe regarding the origins debate, it does an excellent job of clarifying the history, papal teaching, shifting viewpoints, and the relevant theological issues while bringing its readers up-to-date with the latest developments.

Catholicism and Evolution: A History from Darwin to Pope Francis