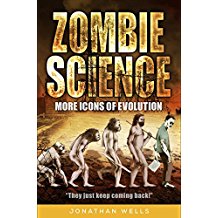 Jonathan Wells’ book Icons of Evolution: Science or Myth was published in 2000, and it immediately ignited a storm of controversy. Wells systematically dismantled "icons of evolution," arguments for evolution based upon misinterpreted scientific evidence. He discussed spurious evidence such as the Miller-Urey experiment that supposedly created amino acids, the building blocks of life, in a test tube and Haeckel’s drawings of embryos of various creatures that seriously misrepresented actual embryonic development to try to prove a common, shared pathway of development for diverse creatures.

Amazingly, seventeen years later the original icons continue to appear in textbooks and are still claimed as evidence of evolution even after they have been proven false or misleading. In Zombie Science: More Icons of Evolution, Wells brings us up to date on the status of his previous list of icons as well as some others that have become popular over the intervening years. You don’t have to go back and read Icons of Evolution since Wells takes the time to sum up the problems with all of his original icons again in this book. However, if the briefer treatment of the original icons in Zombie Science leaves you wanting more, do read the original book.

As you might have assumed from the title, the book is written for a wide audience rather than just academics. The idea “zombie science” has to do with the idea that just as zombies are dead bodies that continually come back to life, zombie science refers to discredited ideas that never seem to die. Wells explains: “But whenever people persist in defending a materialist explanation after it has been shown to be inconsistent with the evidence, and is thus empirically dead, they are practicing zombie science” (p. 18).

The ten icons that Wells revisits from his previous book are the Miller-Urey experiment, Darwin’s tree of life, homology in vertebrate limbs, Haeckel’s embryos, archaeopteryx, peppered moths, Darwin’s finches, four-winged fruit flies, fossil horses, and the descent of man from ape-like creatures. Scientists have learned huge amounts of information about DNA, RNA, and genetics since 2000, so Wells devotes an entire chapter to genetics as they relate to evidence for and against evolution. Other new icons he discusses are the walking whales, junk DNA, the development and structure of the human eye, antibiotic resistance and cancer.

Wells writes for an adult audience, although I think mature teens with some science background can profitably read Zombie Science. Still, I have to admit that I struggled with the chapter on DNA! On the other hand, I found most chapters fascinating.

The chapter on the human eye was especially interesting to me because a few years ago I got into a discussion with a very knowledgeable and bright Christian who was trying to defend evolution based on the development of the human eye. I challenged him regarding the need for concurrent development of the optic nerve, the pertinent sections of the brain, and other components of a vision system—problems for which he had no answers. Wells digs even more deeply into both the arguments presented by evolutionists for the eye as an icon of evolution and the difficulties that undermine those arguments. I wish I had read this book before I had my discussion!