The Harsh Truth about Public Schools 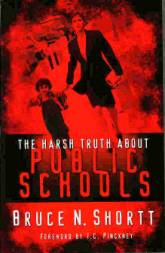 Bruce Shortt first came to my attention as a co-sponsor of an audacious resolution submitted at the 2004 annual meeting of the Southern Baptist Convention. Mr. Shortt, along with T.C. Pinckney, a second Vice President of the SBC, wanted the Convention to pass their resolution stating that Baptists should not be sending their children to government schools.

You can just imagine the furor this resolution created, and not just within the SBC. Major news media picked up this story and followed it through to its ultimate rejection by the SBC.

Picture what might have happened had it passed. Since in the United States the SBC is second in size only to the Catholic Church, if thousands or ten thousands of families suddenly removed their children from government schools, it would likely have caused a huge social upheaval. And the domino effect of other Protestants not wanting to be shamed by the Baptists could have multiplied the exodus of Christian children.

But why did Shortt and Pinckney believe that such a drastic resolution was required? It's all here in The Harsh Truth about Public Schools. Shortt covers all the bases.

He begins with a frontal challenge to Christians in the first chapter, which is titled "Why are you educating your children at a pagan seminary?" He explodes the myth that government schools are religiously neutral, even in the best of circumstances. With this worldview orientation in mind, it is easier to follow along as Shortt chronicles a lengthy list of problems evident in government schools, problems stemming from values clarification, sex education, dumbing down academics, sexual abuse by teachers, medicating children for ADHD, teacher incompetence, violence in schools, endless "educational reforms," and much more.

But Shortt doesn't only blame governments schools. He explains, they are essentially functioning the way they were designed to function. He acknowledges that many of the present problems have arisen because Christians were willing to accept an unholy compromise to create government schooling in the 1800s—they were willing to dilute religion to its lowest common denominators to placate the Unitarians and the Socialists. This compromise, bolstered by Supreme Court decisions regarding separation of church and state, made the present situation with schools inevitable.

Shortt also criticizes Christian churches for their reluctance to fund their own schools and Christian pastors who tell their congregations that sending their children to government schools is not a problem.

He spends even more time demolishing the arguments (and excuses) Christian parents use to defend sending their children to such schools—"nothing bad is happening at my child's school," "but we need our children to be salt and light," "but my child has a Christian teacher," "but I went to public school and turned out okay," "but we can't afford it," and so on.

This book has 88 pages of endnotes for the skeptical reader to verify the facts. It is also indexed, although the index should probably be expanded.

Shortt makes one statement that I believe reaches beyond all the statistics and arguments to get at the primary reason why he wrote the book: "…if all Christians withdrew their children from government schools, sending children to government schools would no longer represent the cultural norm—we would have changed it. This is, in part, the point. By being faithful in the education of our children we are in fact adopting the most effective strategy for changing the culture" (p. 326).

The Harsh Truth About Public Schools