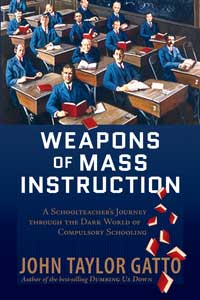 I'm a John Taylor Gatto fan, so I think I've read most of the books he's written. In my opinion, Weapons of Mass Instruction is probably his best yet. While I loved his last book, Underground History of American Education, it's a very long book that can overwhelm the reader who is merely curious. On the other hand, Weapons of Mass Instruction weighs in at only 214, very readable pages.

For those unfamiliar with Gatto, his basic theme is this: Compulsory schooling was instituted for political and social control. In spite of horror stories of school malfeasance, the school system actually accomplishes it's goal fairly well. The result is a dumbed-down, compliant society that suits the needs of government and big business. However, the byproduct of this system is tremendous harm to individuals, families, and society. Gatto is on a crusade to build resistance to and rejection of compulsory schooling by showing us how we have been duped into believing in the necessity of compulsory, government-run schooling.

Gatto gathers his ammunition for this book from the prodigious amount of reading and research he has done over the years. He incorporates articles, speeches, and letters he has written, all tied to his theme. He teaches some fascinating history lessons that actually help to prove his point since they are perfect examples of "things we weren't taught" because they might upset our acceptance of the way things are. As with his other books, Gatto eschews footnotes. If you want to track the actual source of a reference, you'll have to search it out for yourself in most cases.

Gatto's storytelling skill shines as he relates tales of real people who fled the school system and succeeded in spite of the popular wisdom that insists on diplomas, degrees, and credentials ... and he makes the case that schooling often deadens a person's capacity to be independent, creative, and innovative—traits typical of many highly successful people.

If you know someone working through the college search and application process, you might want to have them read his " A Letter to My Granddaughter about Dartmouth" chapter where he shares his dismal view of Ivy League institutions. According to Gatto, education in America doesn't really improve at most colleges and universities.

For those readers who find his thesis far-fetched, in the last chapter Gatto relates three stories of government intervention that buttress his case. One of these stories is of Gatto's experience of having his own lecture at a high school halted midstream by an entire squad of police—a school superintendent apparently found the history lessons too disturbing.

Gatto ends the book with an "Afterword" urging students to join what he calls The Bartleby Project. Since standardized tests are the lynchpin of the system, the concept is that students themselves can launch peaceful attacks against the system by simply and politely refusing to take the tests. Personally, I wonder how many students will actually work up the nerve to join the testing resistance. A stronger "attack" could be accomplished by parents removing their own children from the system AND refusing to use standards-based curricula and standardized tests.

If you are just beginning to suspect there might be a problem with schooling (as opposed to educating as Gatto would say), then you'll not likely find a better exposé of the problem than Weapons of Mass Instruction.

Weapons of Mass Instruction: A Schoolteacherâs Journey Through the Dark World of Compulsory Schooling